Democracy in Turkey Discussed at Polity, Society and the World Seminar

16 December 2013 Comments Off on Democracy in Turkey Discussed at Polity, Society and the World Seminar 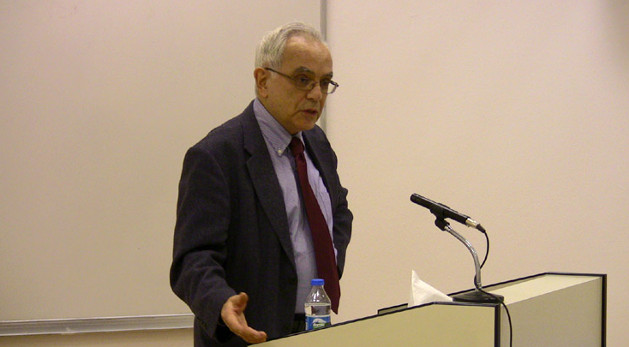 The talk started with an overview of Turkish political developments from 1945 up to the present time. Prof. Sayarı characterized Turkey as a country of early transition and late consolidation. The transition to democracy was relatively smooth, especially compared to the disruptions experienced elsewhere in Southern and Eastern Europe. But despite the promising start, Turkey suffered from three regime breakdowns, in 1960, 1971 and 1980, which hindered the consolidation of democracy. Prof. Sayarı noted that Turkey has been successful in institutionalizing electoral democracy — a political system of free, fair and legitimate elections coupled with a resilient party system. Yet, he observed, Turkey is still lagging behind in its efforts to institutionalize liberal democracy, recording many shortcomings in terms of freedom of thought and expression, human and civil rights, protection of the rights of citizens from the state, judicial independence, and rights of ethnic and religious minorities.

Prof. Sayarı offered invaluable insights on the future of Turkish politics, focusing on two opposing trends Turkey has evinced these last 10 years. On the one hand, the normalization of civil-military relations and the steps taken toward resolving the Kurdish issue should make us optimistic about the future. On the other hand, recent phenomena such as the domination of politics by a single person, the imposition of an extremely majoritarian understanding of democracy and the use of excessive police force constitute what he called the “democratic backsliding” of Turkey. Finally, Prof. Sayarı warned of the perils of a possible transition to presidentialism, which will fail to make the political system more democratic and could pave the way for authoritarian rule in Turkey.