18 November 2019 Comments Off on Digital Nostalgia: A Serious Review of Vaporwave

Due to the relative lack of serenity, the lost feelings toward the future and the constantly increasing gaps in interpersonal relationships, the society of today – especially the segment comprising young people between the ages of 16 and 30 – looks to the past to regain a sense of tranquility. This is reflected in our musical memoirs, with the latest one being the vaporwave scene.

Despite the comedic thread that runs through it, vaporwave reflects this aspect of contemporary society. Often regarded as a genre that is completely ironic and without real artistic value, it has slowly become one of the most thrilling and complete subcultures of 21st-century music. The themes touched upon by vaporwave are technological nostalgia, mild depression, longing for a past that never existed and yearning for the hopes that society had during the ’80s.

Musically, it reflects the properties of the chopped and screwed genre, with slowed down and processed vocals on top of a repetitive, atmospheric and hypnagogic background. Early pioneers could be considered Crystal Castles, with works such as “Magic Spells,” or works by Zach Hill and Andy Morin (aka Flatlander), such as “The Primitives Talk.” IDM pioneers in general, and Boards of Canada in particular, can also be considered early influencers. 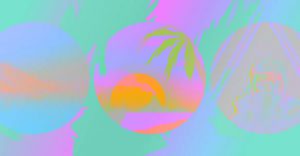 The visuals accompanying this genre are also one of a kind. These are videos or photos imitating damaged videotape, with unstable, glitchy color. The intention here is to reflect our memories from the ’80s – or to make us feel what it would have been like to witness the technological revolution. The colors of the vaporwave scene are exclusively pink and turquoise, as these were the colors that were ubiquitous in the years of the Windows 95 operating system.

There is a compelling collection of vaporwave music on the internet, as this is the place where the genre originated. A source that reflects its characteristic feeling the most and that I find the most enjoyable is the YouTube channel “sunsetcorp.” The videos on this channel will find a place in the deepest corners of your mind; i.e., will haunt you. I recommend that anyone who seeks novel ideas in alternative music – where there is this common pool of artistic ideas that everyone recycles over and over again – visit this channel and get an idea of what to expect in the coming years. The videos I especially recommend are “Nobody Here” and “Demerol.” 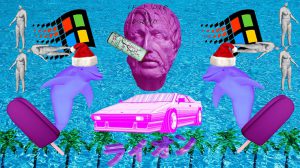 The vaporwave scene is what has been going on for the last decade. So many musical ideas have been tried, ranging from sonic experimentation to novel arrangements in song structures. The scene makes you question whether the time when we experiment with the feelings that music expresses has come. What else can we feel? We have explored many structural and formal boundaries; is this the time when we question our own feelings? That is what exactly vaporwave does. Without the emergence of this genre, we probably would not have even realized that we have a forlorn nostalgia for the early years of the internet. This scene also indicates, by showing how we are embracing digitalization and incorporating it into our flesh-and-bone organic structure, that over time and through societal changes, the notion of what is human is evolving. All this is what lies behind this seemingly ironic and arguably stupid genre.