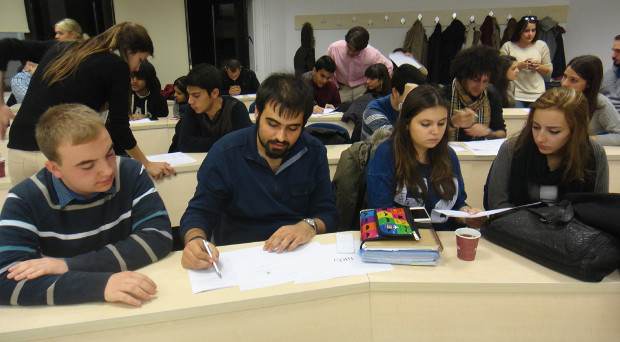 On November 21 a group of third- and fourth-year students in the Department of Economics organized and hosted an event for first-year and prep students: an International Monetary Fund (IMF) Executive Board simulation. The simulation was part of the department’s mentoring program, in which all incoming ECON students are assigned mentors from among third- and fourth-year students.

Approximately 40 BUSEL and first-year economics students were paired with third- and fourth-year students to form teams representing different IMF board members. The simulation started with a country in a dire economic situation requesting financial assistance from the IMF. Each group first internally debated whether or not to lend to this country and then presented their views to the other board members. An active and energetic debate on what type of fiscal policies would be best under such circumstances took place. (The final vote on the request for assistance resulted in its rejection by the board.)

Prior to the simulation, Department of Economics chair Selin Sayek Böke met with the students to present the scenario for the exercise, as well as to launch the second year of the ECON mentoring program. The simulation offered a great opportunity for mentors and mentees to get together and establish friendships. All Department of Economics students interested in participating in the next simulation and/or the department’s mentoring activities are invited to send an e-mail to econmentoring@bilkent.edu.tr.