Okan Atalar, a 2016 Electrical and Electronics Engineering graduate and currently a PhD candidate at Stanford University, is the first author of a paper recently published in Nature Communications that describes an important breakthrough in image sensing. The research team he is part of, working in the Arbabian Lab at Stanford, has developed a high-frequency, low-power compact optical device that allows virtually any digital camera to perceive depth. 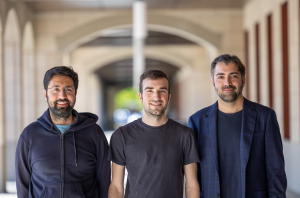 The team’s new approach enables standard image sensors to see light in three dimensions instead of two, making it possible to measure distances between objects with light. Until now, only specialized imaging systems have had the capability of doing this.

The Stanford researchers developed a simple acousto-optic modulator using a thin wafer of lithium niobate. This modulator can be integrated into a proposed system that uses ordinary cameras, making it possible for smartphone cameras, for example, to capture 3D images.

The small size and simplicity of the device also give it the potential for future use in drones or lightweight robotic vehicles. Moreover, says Mr. Atalar, the team has reduced the energy consumption of the device by at least 10 times the already-low threshold reported in the paper, and they believe much greater energy reduction is within reach.