Electrical and Electronics Engineering PhD student Burak Çatalbaş has developed an application for Android devices that will, in the event of an earthquake, enable users to send a message either calling for rescue or reporting that they are safe.

The “DepremBildir” application allows users to send messages directly to their contacts, helping to avoid the problems of an overloaded phone system or an internet outage. Users can reassure others they are safe by sending the message “Deprem oldu, iyiyim sorun yok” (There’s been an earthquake, but I’m fine). In case of emergency, another message – “DEPREM OLDU, BENİ KURTARIN!” (There’s been an earthquake, rescue me!) – can be sent, including information on the sender’s location. 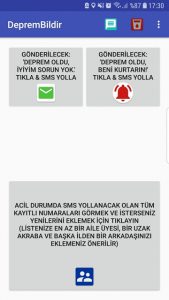 In addition, DepremBildir has a bulk message feature, where the user can write a short text (approximately 50 characters) in their own words, which will go as a single SMS to multiple recipients; this message can also include location information.

All of the above types of messages are sent at the command of the user and go only to phone numbers determined by the user; with location and SMS destination the only permissions required, DepremBildir is more protective of user information than similar apps.

The application does not host advertisements and is offered as a public service, with no intent of making a profit.

DepremBildir can be downloaded and installed via the Google Play Store. Comments and ideas concerning the application may be sent to deprembildir@gmail.com.