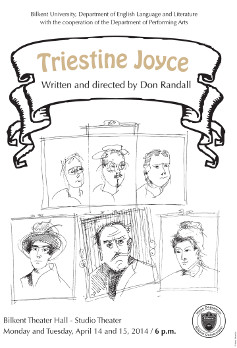 Assoc. Prof. Don Randall’s new play “Triestine Joyce” just had its first performance yesterday evening, and will have its second and final performance this evening, Tuesday, April 15, at 6 p.m. in the Bilkent Theater Hall’s Studio Theater. So if you weren’t there yesterday, this evening is your last chance.

The play is set in 1909 in Trieste, the city where James Joyce lived for 10 years, with his (common-law) wife Nora, his two children and his younger brother Stanislaus (Stannie). James Joyce (Jim) cleverly avoids paying his debts—and even his rent; he debates on various topics with his brother and his wife; makes some sexually suggestive comments and some plainly sexist ones; speaks abundantly (but not always consistently) about life and literature; and even undertakes the role of cinema agent for a group of Triestine businessmen.

DR: You played Lucky Lawton in last year’s play, “The Salvation of Stephen Dedalus.” How would you compare that experience with your experience of the current production?

YS: Favorably. [He chuckles.] This year’s play is more enjoyable. The actors are more committed. I don’t have much to do, so I’m not so worried about my performance.

DR: But I think your character, Ettore Schmitz, is a great role, and very important in the play.

YS: Okay, but I still don’t have as many lines to learn, and I don’t have to act out a miserable existence.

DR: Yes, I guess Lucky Lawton was a rather pathetic young fellow. But Schmitz is certainly quite eccentric, charming but odd. Do you identify at all with him?

YS: Well, “eccentric” basically means “unconventional,” so I guess I like that. But Schmitz is actually quite a cool guy. You could take him as a kind of role model. He’s a peacemaker; he helps other people with their personal problems and their relationships. He’s the only sane man in the play.

YS: [laughing] Well, there aren’t any sane women, in life or in the play!

DR: Jim, the James Joyce character, says women are “sane—oh, perfectly sane”—though he’s drunk at the time and doesn’t seem very pleased by the idea. But if I may shift the topic from women to men, Schmitz, your character, says that all men are afraid to love. What do you think of that?

YS: Well, there’s a certain truth in that. We’re always looking for love, though—so maybe we’re only scared once we actually have it.