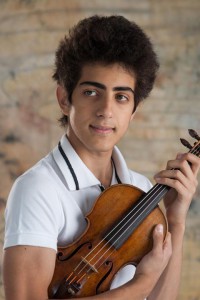 Elvin Hoxha Ganiyev, a student at the Bilkent University Music Preparatory High School, has returned to Ankara after achieving a fine showing in the 5th Moscow International David Oistrakh Violin Competition. Elvin placed third in the junior category (for violinists aged 10-16), a three-round event which began with 125 competitors from around the world.

David Fyodorovich Oistrakh was one of the greatest violinists of the 20th century, and the competition honors his memory by discovering and supporting talented young musicians. This year’s competition took place September 21-30; the international jury was headed by Igor Oistrakh, David’s son and also a violinist.

Elvin Ganiyev began studying the violin with his grandfather Server Ganiyev and Rasim Bağırov. He then entered the Bilkent University Music Preparatory Primary School, placing first in the auditions at age six. Currently, he continues to study with Elena Postnova at Bilkent, as well as with Prof. Zakhar Bron under the “Young Student” program of the Zurich Conservatory.

Already, Elvin has worked with conductors such as Rauf Abdullayev, Gürer Aykal, Yuriy Bashmeth, Erol Erdinç, Server Ganiyev, Rengim Gökmen, Murat Kodallı, Işın Metin, Naci Özgüç, Vladimir Spivakov and Klaus Weise. Legendary conductors who have listened to him perform, including Lorin Maazel, Zubin Mehta and Gennady Rozhdestvensky, have commented that he has a very bright future ahead of him.

His other accomplishments include many first- and second-place finishes, as well as special awards and distinctions, in many other international competitions. He has performed worldwide, in countries including the United Kingdom, the Czech Republic, Norway and Egypt.