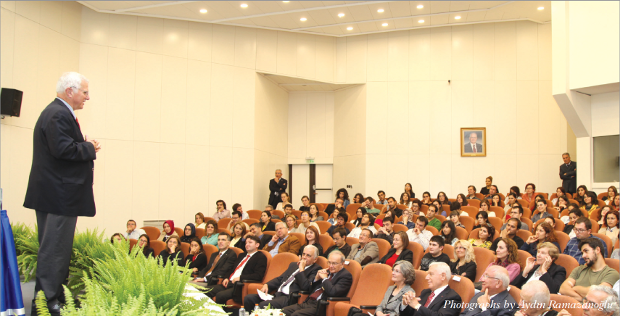 Last Wednesday, the Department of Molecular Biology and Genetics seminars were off to a rousing start as Dr. Bruce Alberts, an eminent molecular biologist who authored the classic textbook “Molecular Biology of the Cell” and has served as president of the National Academy of Sciences and editor-in-chief of the journal Science, delivered the first talk of the year. 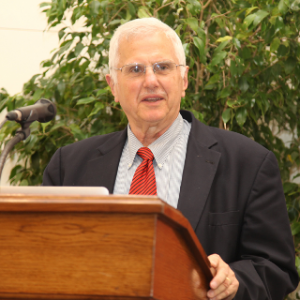 Prior to his speech, Dr. Alberts had a private meeting with graduate and undergraduate students of Bilkent’s Molecular Biology and Genetics and Materials Science and Nanotechnology departments. Due to Dr. Alberts’s keen interest and active involvement in science education, this meeting was dominated by an evaluation of Turkey’s education system and how it might be altered to make science more accessible to general populace, as well as a discussion about recent efforts on the part of several universities in the United States to make their course material available on the internet.

In the opening portion of his talk, Dr. Alberts drew upon his own misadventures as a graduate student — when his ambitious theory on the process underlying DNA replication refused to yield fruit and he was forced to extend his PhD studies for six months — to stress the importance of thorough planning prior to the undertaking of any major scientific endeavor. Indeed, after he had taken the time to consider his strategies and carefully decided on a long-term course of action, his career was a marked by a stunning series of successes that eventually led to the discovery of the full set of seven proteins that drive the replication process in the T4 bacteriophage.

Regarding “me-too science” and the publish-or-perish attitude with disdain, Dr. Alberts also defended the notion that scientists must be given sufficient leverage to pursue their ideas without external pressure to do “useful” research, underlining the fact that many technologies that today form the basis of our lives can trace their origins to scientific discoveries that initially appeared to have little practical use. GPS, for example, could not have been developed without atomic clocks, but this potential was not readily apparent when the first atomic clock was built in 1949. 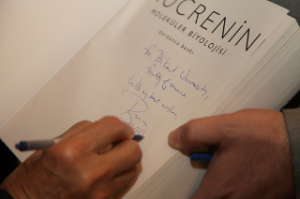 As a witness to (and, with “Molecular Biology of the Cell,” a chronicler of) the direction of scientific research over the latter part of the past century, Dr. Alberts also placed great importance on the future of science in his speech. While the last century was the era of descriptive research in molecular biology, future generations of scientists are expected to utilize the enormous amount of data generated in the past to develop emergent approaches capable of simulating what an entire system experiences, processes and reacts against, instead of focusing on the behavior and interactions of a single component as has generally been the case.

In addition, recent discoveries have not only found answers to longstanding mysteries in the field (such as what all those highly conserved, noncoding sequences in the genome really did), but also demonstrate that even well-established theories are not completely infallible. Young molecular biologists are to expect a dynamic future, where there is no safe ground and even well-trodden roads should be inspected anew to see if more recent techniques can reveal something gone amiss.

Life, forged and reforged across untold eons in the furnace of natural selection, has proven itself time and time again to be much more intricate than once thought, and each breakthrough in molecular biology has served as a testament to the overwhelming complexity behind even the most mundane of biological processes. While the last few decades have been marked by monumental advances in our understanding of biological phenomena, this is no time to grow complacent; there is no doubt that future discoveries will continue to shake the very foundations of our current views, and that the seventh edition of “Molecular Biology of the Cell” — or even the sixth, which is slated to be released in the latter half of 2014 — might end up becoming quite a different book indeed!