According to many, John Cage was one of the most influential composers of the 20th century. I am not going to talk about his music career or his style, but instead concentrate on his controversial 1952 work, 4’33”.

I should start by explaining what 4’33” really is. Well, in the first place, it is a musical work. Maybe referring to it as a “musical” work is a little bit deceptive. It is indeed an avant-garde piece. I had better jump right into it: 4’33” also read as “four thirty-three”—is a piece composed by John Cage, which consists of four minutes and thirty-three seconds of silence! Sorry for the exclamation mark, but I wanted to get your attention, which may have been distracted due to the boring introduction I’ve written.

4’33” is divided into three movements. Since none of the movements contain any sound, in performances of the piece, the musician(s) make(s) some gestures, or find other ways to designate the start of a new movement. 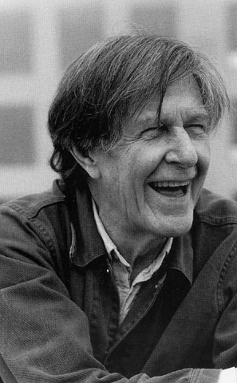 Let me stop talking about the details of the piece and give some brief background information about the idea behind it, and then I will present my humble criticism. Cage was already thinking about composing a “silent” piece, and his visit to the anechoic chamber at Harvard University in 1951—a year before he wrote 4’33”—sharpened this idea. An anechoic chamber is a room that does not allow the formation of echoes and is also soundproof to external noise, so Cage expected to hear no sound at all when he was inside. But he noticed two distinct sounds, one of which was high and the other low. Asking the engineer in charge, he was told that the low one was produced by his blood circulating, and the high one by his nervous system. Hearing that, Cage realized, as he later wrote: “Until I die there will be sounds. And they will continue **************** following my death. One need not fear about the future of music.” There is an interesting interpretation of the title of the piece in connection with this quotation. 4’33” gives the number 273 when converted to seconds.

And -273 °Celsius (or 0 kelvin ) is the definition of absolute zero, where technically all life ends. So the interpretation suggests that the title comes from this fact, which in my opinion may well be true. Another influence on Cage was Robert Rauschenberg’s series of white paintings, again in 1951.

Now it is time for some—or a lot of—criticism. I must admit that the idea behind the piece is clever, but it is not my cup of tea. My criticism is not about 4’33” in particular, but rather all of those artworks sharing the same absurdity. Ask yourselves what the reaction would be if this piece had been composed and/or performed by an average person. My answer is, surely its first presentation would have been its last, and most probably searching for it in Google today would be a futile effort. What I want to point out is that, in my opinion, a work of art must be evaluated independently of its creator. Otherwise artists’ previous works can influence the impact of their later ones, a situation I find wrong and misleading. Moreover, the same (by the same, I mean 100% identical) work of art by two different artists would be differently evaluated in that scenario, which would be a disaster! Such a situation leads to the following problems: First of all, new artists will always have a more difficult time than established ones in presenting their work to the public. And secondly, established artists will have the luxury of presenting sloppy work just because they have created something notable in the past! I strongly believe that this will only distort the quality of the artistic productions appearing. Also, please don’t forget that we are living in quite a capitalistic world, and record companies, movie production companies, art galleries etc. contribute to the above-mentioned situation.

To conclude, I want to say that 4’33” (and all similarly absurd works) are extremely overrated, and in my opinion their huge dependence—in terms of how they are evaluated—on the reputation of their creators damages the concept of art itself. Stay connected to true and sincere art and, of course, music.