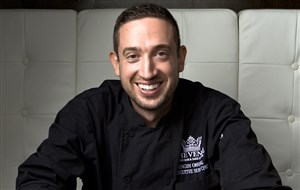 Bilkent graduate Engin Onural (BIM/’05), a Turkish sushi chef and restaurant owner in the US, was recently added to the listing of notable chefs published in the 2015 edition of “Best Chefs America.” Chefs are chosen for inclusion based on the judgment of fellow chefs, other culinary professionals and food enthusiasts.

Mr. Onural said he has been working hard to become a leading chef for the past 10 years. “This award is special for me,” he declared. “I always see myself as a volunteer cultural ambassador between the US and Turkey. I have tried my best to represent Turkey here.”

After earning a bachelor’s degree in business, Mr. Onural enrolled in the Sushi Chef Institute in Los Angeles. In 2011, he opened his own restaurant, The Venue, located in Palm Desert, California; its fare was named the “Best Sushi” by Palm Springs Life Magazine in 2012, 2013 and 2015.