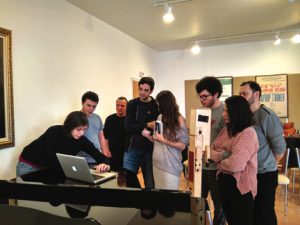 The Faculty of Music and Performing Arts recently hosted two music ensembles for consecutive residencies, during which both groups of musicians worked with Bilkent Composition students as well as performing concerts.

From February 25 to March 1 the Hezarfen String Quartet was resident at Bilkent. The quartet is part of the İstanbul-based Hezarfen Ensemble, known for its performances of contemporary music and stagings of multidisciplinary projects scored for everything from small instrumental formations to large ensembles, and incorporating such diverse elements as electronics, poetry and video.

During their stay, quartet members Özcan Ulucan (first violin), Şenol Aydın (second violin), Ulrich Mertin (viola) and Gökhan Bağcı (cello) rehearsed and commented on works composed by composition students Deniz Aslan, Deniz Çağlarcan, Artun Çekem, Arda Turhan and Arda Yurdusev. The quartet then presented the reworked pieces during a public concert given in the Bilkent Concert Hall at the end of the residency on March 1.

On March 2–3, FMPA hosted the “airborne extended” ensemble , whose members play the harpsichord, recorder, flute and harp. Although the harpsichord and recorder in particular are generally associated with music from earlier periods, airborne extended advocates for and performs modern music; the ensemble is currently serving as a cultural ambassador for its homeland of Austria. 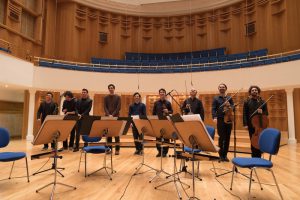 On March 2, airborne extended gave a concert in collaboration with the İstanbul Composers Collective as part of the Bilkent New Music Days series. Members of the ensemble, either solo or in different combinations, and sometimes with electronic manipulation of their sound, performed works by both Austrian and Turkish composers – Fernando Reiderer, Onur Dülger, Uğurcan Öztekin, Mithatcan Öcal, Mehmet Ali Uzunselvi and Bilkent Composition master’s student Engin Dağlık – in Saygun Performance Hall. On the following day, the performers presented the intricacies of their instruments at a workshop for Bilkent Composition students that was also open to the public.