Exhibition Opening: “Tradition and Contemporaneity of Tatars – The Polish Muslims”

04 December 2017 Comments Off on Exhibition Opening: “Tradition and Contemporaneity of Tatars – The Polish Muslims” 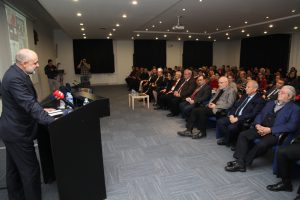 Yet another bridge was established at Bilkent on November 29, extending to the culture of the Tatars of Poland, with the opening of an exhibition titled “Tradition and Contemporaneity of Tatars – The Polish Muslims.” As noted by Provost Adnan Akay during his opening remarks at the event, this bridge is certainly consistent with the vision of Bilkent’s founder, Prof. İhsan Doğramacı, who put great value on establishing close ties with Poland. The fact that there are a number of Polish faculty members at Bilkent today is a continuing legacy of this vision. When Maciej Lang, Poland’s ambassador in Ankara, took the podium, he first expressed his gratitude to Bilkent University for hosting the event and the exhibition to follow. Mr. Lang then referred to the long history of the Tatar presence in Poland and emphasized the tolerant social climate that communities with different ethnic and religious identities enjoyed under the rule of the Polish–Lithuanian Commonwealth from the sixteenth century to the end of the eighteenth.

During his keynote speech, Assoc. Prof. Hakan Kırımlı of the Department of International Relations presented a detailed history of the Tatars, who settled within the realm of the then Grand Duchy of Lithuania in the first half of the fourteenth century. More came in masses in the aftermath of the defeat of the Golden Horde by Tamerlane at the end of the same century. Soon afterward, the Tatars became a key component of the Lithuanian military. They enjoyed certain social privileges and quickly intermingled with the locals. Though they preserved their ethnic and religious identity to a great extent, they had mostly lost their own language by the seventeenth century. The Tatar nobles joined forces with their Polish peers to stand against the Russian Empire of Catherine the Great. Following the final partition of Poland at the end of the eighteenth century, many Tatars were left within the territories of the Russian Empire.

As a follow-up to Dr. Kırımlı’s overview of the Tatars’ past, Tomasz Miśkiewicz, the current mufti of Poland, shared information on the political and social developments that Tatars experienced during the twentieth century. Bitter struggles were inevitable during both world wars. Though the Muslim Religious Union in Poland was established in 1925, electing its first independent mufti, the Tatar communities were left without a mufti between 1945 and 1989. Their religious and cultural life was heavily restricted during this time. Mr. Miśkiewicz, who took office in 2004, is only the second elected mufti of the Union since its inception. 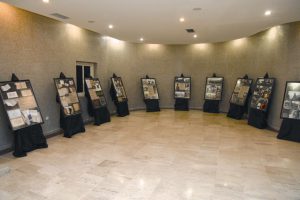 Once having a population as high as 120,000, the Tatars in the Republic of Poland number a mere 3,500 among a total 45,000 Polish Muslims today. Nevertheless, they are known as a proud community, always loyal to their land and connected with a rich and honorable past. Next year, the Tatars will celebrate the 622th anniversary of their arrival in the lands they have called home ever since.

The exhibition “Tradition and Contemporaneity of Tatars – The Polish Muslims” will be open for visiting through Friday, December 15 in the basement foyer of FADA’s FF building.