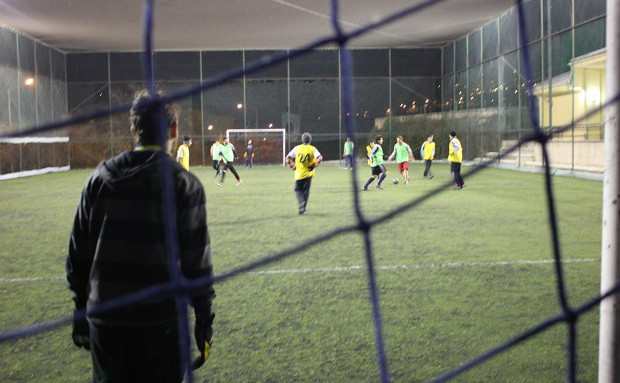 Football is an important part of Turkish culture, and Bilkent’s mini football fields (hal? sahalar) give students the opportunity to participate in their favorite sport. The university has four such fields, two each on the Main and East campuses. The fields are open from 10 a.m. to 11 p.m., and are available by reservation. (To reserve a field, call ext. 1993 or 1325 for Main and 5350 for East Campus one day in advance.)

Even with the great interest many students have in football, it’s sometimes hard to get a team together. U?ur Akkurt, a second-year Computer Engineering student, had a solution for this problem. He started a group on Facebook called “Bilkent Hal? Saha,” where Bilkent students can form teams more quickly and easily. Bilkent News interviewed him about football at Bilkent and his Facebook group.

B.N.: What do you think about football at Bilkent? Do you think the interest in football here is greater or less than it is at other schools?

U.A.: The interest level is the same here as it is anywhere else in Turkey—it’s really high. The problem is that football doesn’t have a high enough profile on campus. For instance, it would be nice if our school team got more publicity.

B.N.: When and why did you start the Facebook group?

U.A.: The group has been active for almost a year. Sometimes we couldn’t find enough people to play football with, and sometimes we even had to cancel matches, so some of my friends and I decided to create this group.

B.N.: Did the group have a positive effect on football on campus?

U.A.: Yes, certainly. Especially at times when everyone is studying for midterms or finals, it’s hard to find someone willing to allocate time to sports; but in our group, everyone is interested in sports. We now have no difficulty organizing a match.

B.N.: How does it feel to play with strangers?

U.A.: It’s really nice, because before we were always playing with the same people. With new players joining us, our matches are now more challenging.

U.A.: As students who love football, we’re closer to each other now. This group helped us get to know each other. Speaking for myself, I’ve made lots of friends through this group, and I don’t get together with them only for matches—I also meet up with some of them away from the field.

B.N.: Do you think the number of football fields is sufficient?

U.A.: There are two football fields for each campus. I think it would be a good idea to construct one more field on Main Campus, because there are more people playing football there.

To all those who enjoy playing football: Anyone who is interested can join the Facebook group at https://www.facebook.com/groups/bilkenthalisaha/.