Asst. Prof. Berk Esen is vice chair of the Department of International Relations. His educational background includes degrees from Turkey, Germany and the United States; he received both an MA and a PhD in government from Cornell University. Prior to joining Bilkent, Dr. Esen was a visiting researcher at Columbia University in the US, Sabancı University and Torcuato Di Tella University in Buenos Aires, Argentina. His research and teaching interests include the political economy of development, party politics and authoritarian regimes, with a focus on Latin America and the Middle East. 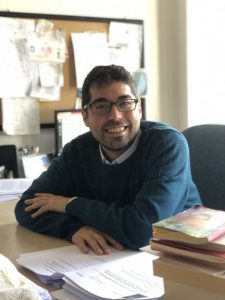 I became a professor because it’s the best occupation in which to pursue a life of continuous learning. The pursuit of knowledge has no limits, and the chance to disseminate what one learns to others is so exhilarating. I really find academia to be a calling for this reason. I still can’t believe my luck that I get paid to read and write about topics that intrigue me. Obviously, I have to work to make a living. But even if I were independently wealthy, I would still have done 70 percent of what I currently do as a professor for free.

Why/how did you choose Bilkent? What do you like the most about being at Bilkent?

I first heard about the high academic standards at Bilkent, Turkey’s first private university, in my teenage years. Having studied in the US, I didn’t have the chance to go to school here but have always respected Bilkent’s academic quality. That’s why I decided to apply for a position as soon as I saw the ad for a job in my current department. This turned out to be one of the best decisions of my life. There are many things that I like about Bilkent. It offers great resources to its faculty members and respects academic freedom, which is important for me. We’re surrounded by other talented academics and university employees. I also really like Bilkent students – they’re smart, polite and unpretentious.

I’m currently working on several projects simultaneously; they deal with democratic backsliding in populist regimes around the globe. One of my projects is about pro-government mobilization in hybrid regimes. I try to explain why and how authoritarian regimes mobilize their supporters. I’m also working on the foreign policy agendas of populist parties in power. Lastly, with a colleague of mine, I’m compiling a large network dataset of Turkish political elites since 1923.

My best work is probably an article that I coauthored on the rising competitive authoritarian regime in Turkey, which got published in Third World Quarterly. It was the first comprehensive academic account of Turkey’s democratic breakdown in recent years and totally changed the academic debate on this topic, pushing analysts to focus more on the uneven playing field between the ruling party and the opposition in contemporary Turkey. As a result, it got read and cited in numbers we rarely see in Turkey. It quickly became the journal’s third–most cited article and has been read by more than ten thousand people.

Teaching! There’s nothing more exciting than being in front of students who follow what you say in the classroom. You could say that I’m a bit old fashioned in that sense. Although conducting research is an important part of an academic’s work, teaching students is an absolutely crucial aspect of university life. Both my mother’s mother and father’s father were teachers, so I like to think that I’m continuing their tradition. It really brings me joy to follow what my students do after they graduate and see their success in both academic and professional life. I can’t think of anything cooler than that.

I can narrow the list down to two moments. The first one is my parents’ decision to send me to middle school (Robert College) in İstanbul, even though we were living in İzmir at the time. Although it was difficult to adjust at first, I later felt that I got a world-class education that taught me how to think in a critical and independent manner. The school’s model was very different from that of the traditional Turkish education system. The second one is my decision to pursue my undergraduate studies in the US. Moving to the US just before the September 11 attacks, as a 17-year-old kid, was a daunting experience. On both occasions, moving to a new school so far away from home was tough, but it really strengthened my character in the end.

What has been the most exciting moment of your career so far?

Getting the Sakıp Sabancı International Research Award for a comparative project on the populist regimes that have recently emerged in Turkey and Hungary. This is the only award given in the social sciences in Turkey that’s open to international competition.

To quote Harold Lasswell, politics is really about “who gets what, when and how.” In order to understand how a political system operates at any given time and place, I repeatedly ask myself that question. Focusing on the resource distribution mechanism of a political regime helps shed light on what most people claim to be the mysterious process of politics.

I do my best thinking during the dead of night when most people are asleep. I really like the peace and quiet of the post-midnight hours, so you could say that I’m a night owl!

Social media! Unfortunately, I’m a big procrastinator when it comes to doing academic writing. In recent years, social media has become a convenient way for me to postpone writing tasks. In non-writing tasks in academia, however, I rarely get distracted. So I guess it balances itself out.

The human condition! We all come into this life only once and know that it’s going to end at some point. We’re the only living creature to have some understanding of death. Therefore, our entire struggle comes down to finding some meaning in life so that we can make the most of our short time in this world. How human beings deal with this fundamental question in their own unique ways really captivates me. I think that this question lies at the root of any discipline in the social sciences.

Most nonacademics think that professors have a light workload because they only teach a few courses and then they’re done. This couldn’t be further from the truth. Although it’s true that academics have more flexible working conditions than most people, we also have to multitask and are never done with work. Most of my working time is allocated not to teaching but rather to administrative work, doing research and writing reference letters for students. It never ends!

Hang out with friends, watch movies and read novels.

The books I read during summer breaks while I was in high school really shaped my political views and take on Turkish history. It’s difficult to select only one, though. Professionally, the book that has influenced me most is “Competitive Authoritarianism: Hybrid Regimes After the Cold War” by Steve Levitsky and Lucan Way, who have defined a new regime type that merges competitive electoral practices with authoritarian policies. It really helped me to understand many cases around the globe in recent years. Much of my recent work is based on the literature that originated from this book.

This is a tough question for me, because I’ve wanted to be a professor ever since the time I began to seriously consider my career prospects. I love my field, so if I hadn’t become a professor, I probably wouldn’t have been happy. A distant second career choice would be a political analyst or journalist. The latter would have been tough for me due to the constant deadlines, though.

Self-actualization! It’s important for any human being to realize his/her true potential and enjoy life to the fullest.

Try to be more organized, and don’t miss deadlines! In the end, it all works out fine.