Nicholas DiBella joined the Department of Philosophy in 2018. He received a BS in physics from the Massachusetts Institute of Technology in 2009 and a PhD in philosophy from Stanford University in 2018. He was born in New York, grew up in Florida, and loves pizza. 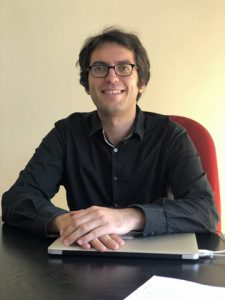 I don’t think it was a particularly conscious choice. It’s just that when you’re studying something that you’re very interested in, and you want to keep studying it, you realize that there’s a job called “professor” where you can just keep thinking about that thing. And I’m more interested in philosophy than anything else.

How did you choose Bilkent?

I heard about Bilkent a couple of years ago. I was visiting the Australian National University in Canberra, Australia, and there were several Bilkent philosophy MA students visiting. There’s an exchange program between Bilkent and ANU, and that’s how I learned about Bilkent. One of the students mentioned a job opening and talked about the department, and it seemed like a good place to be.

Well, the overarching theme of my research is to develop a probabilistic approach to metaphysics. In metaphysics we ask questions about the fundamental nature of the world. Questions like, “What’s the nature of time and space?” or “How complex is reality?” I don’t think we can answer these sorts of questions with complete certainty; the best we can do is to determine the probabilities of different answers. At a broad level, what I’m trying to do is to develop a method for calculating these probabilities – basically, to figure out how confident we should be in one answer as opposed to another.

My best work is still in progress. I started developing this overarching project during my PhD studies, and it evolved into a bigger and bigger project, which I’m hoping to turn into a book in the next few years.

Bertrand Russell once made the point that the most philosophically interesting conclusions are the ones you get from the least surprising premises. You start with something that’s very obvious, and then somehow you get someplace very unexpected. It’s very exciting when this happens.

When I was in grad school, there were a number of points when I thought seriously about leaving academia. However, the summer following my fourth year, I did some traveling. I traveled to Australia, for example. I met a lot of Australian philosophers, who reinvigorated my interest in philosophy. I also met the person who later became my wife. I was much happier overall, and was able to enjoy philosophy all over again.

In solitude, someplace quiet, someplace that has good sunlight – I can’t work in basements or rooms without windows.

Everything that’s not included in the previous answer.

A lot of people outside philosophy don’t really know what’s going on in philosophy. Philosophy is about asking fundamental questions about everything. I don’t really think there is a sharp boundary between philosophy and other intellectual disciplines.

I like to spend time with my wife and my cat – a very, very special and cute little boy.

Something that allowed me to express myself creatively.

I doubt that there’s a single recipe that applies to everybody. What has helped me is to generally have a good idea of what’s important to me and to direct my activities, feelings and thoughts accordingly.

I would say, so much of what you’re so worried about is completely unimportant. You should take some time to figure out what really matters to you. You may be surprised to find out what the answer is. Take a step back every now and then, and reflect upon what’s important to you in life and whether you are living in a way that is aligned with your values.