Asst. Prof. Tudor A. Onea is a faculty member in the Department of International Relations. He has a very international background; although born in Romania, he pursued bachelor’s and masters’ degrees in Japan, spending seven years there. After returning to Romania and teaching for a time, he studied for a PhD in Canada and then did postdoctoral work in the US, Canada and Singapore before joining the Bilkent University faculty. His area of interest is international security, in particular issues that have to do with the role of status and social rank vis-à-vis political power, and the foreign policy of the United States. 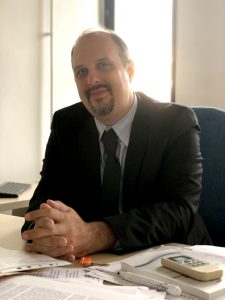 This is the only job in the world where you’re not only encouraged but also required to follow your intellectual curiosity. Most other jobs are more a matter of routine than of creativity. If you want to ask why things are a certain way or how they might be otherwise, this is probably the only job on earth where you’re allowed to do that and engage in it as an occupation. That’s the research part of academia. Then there’s the teaching as well, my interest in which I get from my mother, who was also a teacher.

Why/how did you choose Bilkent?

While I was in Romania, one of my former students did an MA at Sabancı; I wrote him a letter of recommendation. He subsequently told me that he was very impressed and happy with the infrastructure and professionalism of Turkish academia. Also, we held a conference where many of the people who were presenting were from Bilkent. And when I saw that there was a job opening there that had a research component, the first thing I did was call and check with my student. He confirmed my initial expectations regarding Bilkent’s reputation for excellence, so I applied and got the job. That’s the short version. The long version includes a lot of other things, not least the food in Turkey – künefe, profiteroles, kebabs; the list would go on and on.

I’m working on a book about grand strategy, which will be a very big project. There’s an increase of interest in this area among both policy makers and academics. Grand strategy is essentially the blueprint that drives foreign policy, looking not just at two countries but also at how relations among several countries may impact others. It’s essentially the plan that guides you in terms of peace and war. How do countries decide which path to pursue? What types of grand strategies exist, and which ones succeed and which ones fail? This may be a book that will be of some use to students, and allow me to launch a pilot course to see just how useful it is.

I’m very interested in what drives human behavior. Why do we act the way we do? Why do we make the decisions we make? What I find most interesting in asking this question is that the answers I get contradict the established wisdom, in terms of the unconscious elements that drive us to make these decisions and the justifications we come up with to explain why we made them. This is very important, because international politics have consequences we care about.

Can you share a turning point or defining moment in your career?

Such a point would be when I decided to leave Romania to study in Japan. That was in 1996; at that time there were no departments of political science or international relations in Romania. So I started looking for scholarships abroad, and one I found suitable was offered by Japan. I didn’t know much about the country, but when I went there, it was very little like what I had expected. If anyone remembers the old “Star Trek” series, it was like being stuck on a foreign planet where your translator doesn’t work. Once you’re there, you realize that you’re absolutely illiterate, because everything is written not only in Japanese but also in Chinese characters. So it was fascinating, and you could see that you lived in a world that was so much larger than you could have imagined. You discover that there’s a lot for you to learn. It was a great experience, because I learned not only my own subject but also more about the world, and this taught me the virtue of humility. It felt like jumping out of a spaceship in the middle of nowhere, but it worked out fine. I survived.

It’s Leon Trotsky’s saying, “You might not be interested in war, but war is interested in you.” Politics may have huge consequences that affect one’s life. If you don’t study this, you can’t anticipate how much of an effect it may have at some point in time. Maybe you shouldn’t necessarily pursue this subject as a major, but having some knowledge is an advantage.

Probably walking in the middle of the woods with no one around. In the modern world, we don’t take the time to slow down. We’re always on the move. The curse of multitasking has befallen us since cell phones were invented. In order to be able to think, you have to take your time, slow down and be a part of the greater environment. This allows you to appreciate the small things in life that are free, such as a beautiful autumn day. It often takes a lot of time to go over big ideas.

For fun: reading, movies, music. As a distraction: paperwork.

It’s more about the job itself. Some people think that academicians have a lot of time on their hands. However, this is not idle time. It’s time that you need to think things over. It’s not the same as working in a factory, but it’s still work.

I would be a psychologist or a movie director. I think it’s interesting how stories are told in this day and age.

When you have a good thing, try not to mess it up. Life will occasionally give you a gift, and you might not realize how precious it is, so you might try to improve it or make it better. But by doing this, you may instead ruin what you already have. You have to realize that if there’s something good, you should enjoy it quietly. Don’t try to always be on the run in pursuit of what’s better, larger,  greater. Being a perfectionist makes you your own worst enemy. You’re never going to be content that way, so instead learn to be satisfied with the good things in your life.

Things are going to work out all right, so don’t worry too much. That was the motto of my advisor in Canada: something will always turn up.