23 April 2019 Comments Off on FACULTY Q&A: Interview With Ergün Yalçın 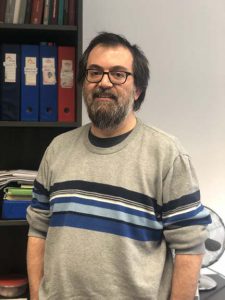 You become a professor when you like your subject area, and I’ve liked mathematics since my younger years. I received good instruction at my high school, İzmir Fen Lisesi, as it had very talented teachers who put me on the right track. So when I went to university to study electrical engineering, I already knew a lot about math. Even though I was studying engineering, I took a lot of courses from the mathematics department. The subject always kept drawing me toward it; I could never give it up, and that’s how I knew it was right for me.

Why/how did you choose Bilkent? What do you like the most about being at Bilkent?

I knew Bilkent from my undergraduate years. At that time, the university was very new. But even at the beginning, it accepted only talented students, and because of its scholarship program, it was a place that attracted very talented students. Also, the teachers were really good. So, when I decided to come back to Turkey after completing my PhD, it was my first choice as a place to work at as an academician.

I have many. For example, today I’ve been doing revisions on a joint paper with one of my graduate students who has been working with me since last semester; I’m also working on a paper with someone from İstanbul. Usually I try to have multiple projects going so that I always have something to do. It helps, because that way if you get stuck on one, you can switch to one of the others.

Can you share a turning point or defining moment in your career?

In my third year as an electrical engineering student, I started taking mathematics courses. I took a topology course, and it really drew me toward the subject; after that, I could never give it up.

How did you know you wanted to switch from electrical engineering to mathematics?

What’s been the most exciting moment of your career so far?

Last year I gave a talk at a major conference. It felt good to be included in a very small list of invited speakers. You feel honored when you’re invited to do something like that alongside people you really respect.

Mathematics isn’t just numbers or equations; it’s about ideas. You start working on an idea, and you find a structure that people may not know about at that time. Then you develop a theory on what you observed. When it’s a solid theory, people will eventually use it, even if it’s not until a number of years later. Mathematics isn’t about what people are using at the moment but rather about what they might be using fifty years later.

Everywhere! If your brain is very active, you can think anywhere – while you’re walking, driving, sitting in front of the TV, or with your family. However, if you’re having a low period or if you’re tired, you won’t be able to focus even in a quiet room. I believe that thinking doesn’t require a particular spot.

Things I have to do that I shouldn’t forget. Like today, I have to go and pick up one of my children at school. These kinds of things stay with you all day, as you keep thinking about them. Administrative responsibilities, like getting a visa for a conference or writing a report, also really distract me.

There are some conjectures in mathematics that I’d like to know whether they’re true or false, and I’m curious as to whether someone will prove them in my lifetime.

People think mathematics is about memorizing. However, it’s entirely a matter of logic. You need to understand it in a way that’s so natural to you that it’s like walking or biking. You don’t need to look at your notes while you’re biking, right? Truly learning mathematics is like getting to know something that you can do without looking at formulas.

I spend time with my family; I have three children, and I like to play board games with them. The five of us, including my wife, will play Monopoly, Scrabble or any board game. We also watch movies together, and we often take long walks, like 5 to 10 kilometers.

I’ve read Orhan Pamuk’s works; I think he’s a great writer. He’s the only Turkish author to have received the Nobel Prize in Literature.

Painting or writing. I think what I do is very similar to writing a novel. First you think of an idea, then you try to make it happen, and if it doesn’t work, then you revise it and do it again, and eventually you show it to people.

You need to like what you do for a living, because you’ll do a lot of it. You shouldn’t choose a profession that you’re not satisfied with. Also, family is very important. If not family, then positive friendships, but you need something to keep you happy.

If you could go back to your undergraduate/graduate-student years, what advice would you give your younger self?

I would advise switching to what you like earlier, because I finished my engineering degree but in the end it wasn’t very useful to me. Also, looking at my students right now, they’re making the same mistakes I used to, like studying on the last night before an exam. I used to do that a lot too, but then you don’t remember the material in the long run. Anything you study at the last minute doesn’t stay with you, because doing it that way isn’t exactly studying; it’s just rushing. If I could go back, I’d say, take your time, learn less if you need to, but don’t just study on the last day.