14 May 2019 Comments Off on FACULTY Q&A: Interview With Simon Wigley

Assoc. Prof. Simon Wigley studied philosophy, politics and economics at Otago University. After completing his master’s and doctoral studies at the London School of Economics and Political Science, he joined the Department of Political Science at Bilkent University. In 2003 he moved to the university’s newly created Department of Philosophy; he currently serves as the department’s chair. Dr. Wigley’s research interests are varied, ranging from theoretical work in normative political philosophy to empirical work in comparative politics. 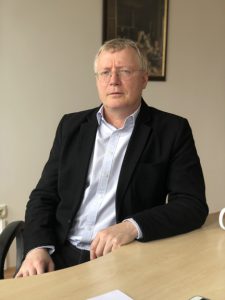 I like the idea of being able to spend time working on research that you can select rather having to be told what project you should work on. It suits my approach, my background and my family. The idea that you can choose your research area – a degree of choice that normally doesn’t exist in most jobs – is pretty important for me.

Why/how did you choose Bilkent? What do you like the most about being here?

When I came to Turkey, I visited all the universities, and this is the one I preferred. It turned out to be a good choice, as it has a very good academic and teaching environment.

Generally, I’ve been doing a lot of work on the connections between democracy or political institutions and aspects of population health such as child mortality. Recently, I’ve been collaborating with a group of scholars in the US, and we’ve started looking at noncommunicable diseases such as cancer and heart disease; our work has been published by The Lancet. Basically, the idea is that the global health community has been focusing primarily on infectious diseases, child health and maternal diseases. These are important, but this has led to everyone taking their eyes off other areas, including heart disease and cancer, which are now the main causes of death in low- and middle-income countries.

You should’ve asked me what my worst work is; that’s easier. But to answer your question, probably what I just mentioned – the work that was published in The Lancet.

The interdisciplinary approach; I prefer not to work in one strict area. Even my degree is in philosophy, politics and economics, and now I’m doing a lot of work on population health. That interdisciplinary connection, working with people from other areas, really excites me!

I think philosophy is important because so many subjects have become so specialized even within departments – colleagues can’t talk to each other because they don’t understand each other. Philosophy is at a more general level, so it’s able to connect between subjects like biology, neuroscience, law, physics, etc. So I think the important thing is for people to take philosophy more seriously; otherwise everyone is going to become like a pin maker in the Adam Smith sense, producing just one piece of research in one sub-area.

In the morning, very early. And especially while running or traveling.

A good book can be a big distraction – I want to read it, even though it may not be what’s optimal for me at that time.

I think right now, the connection between philosophy and cognitive science. That’s really interesting for me, and it’s something I’m currently working on with the Neuroscience program.

Philosophy, in Turkey, is often associated with theological inquiry or European philosophy, whereas our department is more analytic and focused on the Anglo-American tradition. In that tradition there is an emphasis on conceptual clarity and the quality of argumentation. We’re also not afraid to learn lessons from the empirical sciences. Those other areas are not unimportant or uninteresting, but there’s a treasure trove of research in the Anglo-American tradition, and even in the history of philosophy, that most people in Turkey remain unaware of.

Which books have influenced you the most?

Probably John Rawls’s “A Theory of Justice,” Janet Frame’s “An Angel at My Table,” Primo Levi’s “The Periodic Table,” Cordelia Fine’s “Delusions of Gender” and Angela Carter’s “The Passion of New Eve.”

I think having lots of intellectual challenges. Every philosopher will say this, probably. That’s what we do: think, think, think!