Fantasia: A Masterpiece Far Beyond Its Time

05 May 2014 Comments Off on Fantasia: A Masterpiece Far Beyond Its Time

“Fantasia” is an animated movie from 1940. You may instantly say, “What is a movie doing in this music column?” Well, “Fantasia” is not only an animated film, but a breakthrough, both in the music industry and in film production.

Today, we encounter the use of music synchronized with animation all the time. But in the early and mid-20th century that was not the case. First of all, there were not many animated films. In fact, there were quite few; “Fantasia” was Walt Disney’s third animated film, for instance. Although music was of course used in early 20th-century movies, there was no real effort to synchronize it with the action.

Let me now talk about “Fantasia” in more detail. One feature of that great film is that it was the first commercial film shown in stereophonic sound. Today’s surround-sound technology has its roots in Fantasound, which was the stereophonic sound reproduction system used in “Fantasia.”  Fantasound was developed by the Disney engineers, and it really constituted groundbreaking progress for both the film and music industries.

Turning to the content, “Fantasia” consists of seven segments plus an intermission-like interlude, with each segment accompanied by a different animation. Some of these animations tell stories, while others are just abstract pieces. First comes the Toccata and Fugue in D minor by Johann Sebastian Bach, with abstract animations. The second segment is the “Nutcracker” Suite by Pyotr Ilyich Tchaikovsky, with a backing animation in which the main theme is the changing of the seasons. Then follows “The Sorcerer’s Apprentice” by Paul Dukas. In that segment, the famous Walt Disney character Mickey Mouse is featured as the sorcerer’s apprentice, finding himself in a difficult situation after trying out his skills as a magician. After that comes “The Rite of Spring” by Igor Stravinsky. This time, the early formation of our planet, including the rise and then extinction of the dinosaurs, is the accompanying animation. The intermission has a brief jazz jam session and also a section depicting how sound is rendered in film. The “Pastoral” Symphony by Ludwig van Beethoven follows the intermission, with animated figures from classical mythology. The “Dance of the Hours” by Amilcare Ponchielli is next and consists of four sections: morning, afternoon, evening and night, with different animated animals dancing in the four sections, then all dancing together at the end. The final segment is a combination of two pieces: “Night on Bald Mountain” by Modest Mussorgsky and “Ave Maria” by Franz Schubert. The animation for this last segment features the devil Chernabog (“black god” in Proto-Slavic) summoning evil spirits, which are then driven away by the tolling of the Angelus bell.

What makes “Fantasia” so unique and groundbreaking is the perfect synchronization of the animation with the music, as well as the stunning hand-drawn animations themselves, still marvelous by today’s standards even after the lapse of more than 70 years. 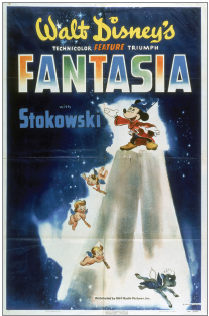 There is one other issue I want to talk about. Classical music is used quite widely in film scores. Although I am unsure, my educated guess as to why is the following: Most classical music pieces have no copyright, since during the time they were composed there were no such laws or even a hint of them. So if my guess is correct, using classical music is a smart way for film producers to save money. As far as I know, the earliest copyright laws for music date back to the 19th century. Walt Disney did in fact need to pay for the rights to use “The Sorcerer’s Apprentice”; I don’t know about the other pieces that were used  in “Fantasia” (since some of them are post-18th century, the producers may have paid for the rights), but one interesting thing is that Disney spent one-fifth of the film’s budget (which was 2.28 million dollars—for a box office gross of 83.32 million dollars) on Fantasound technology and recording techniques.

In my opinion, “Fantasia” is a “must-see” animated film—one that resulted in great improvements in both the film and music industries, and demonstrates the importance and the magical touch of music in other fields. Stay connected to music.