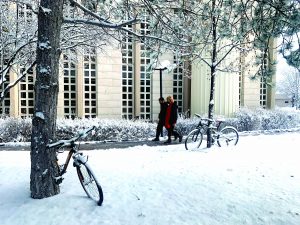 In Memory of İhsan Doğramacı

“A Few Tricks to Make Solids Slippery,” by Prof. David Quéré (ESPCI-Paris and École Polytechnique), at 1:30 p.m. Organized by ME and the French Embassy in Ankara.

“The Architecture of the Caucasus in the Global Middle Ages,” by Prof. Emeritus Robert Ousterhout (University of Pennsylvania), at 6 p.m. Organized by HART.

“Gaseous Microfluidics: Molecular Tagging as an Experimental Tool for Analyzing Its Particularities,” by Prof. Stéphane Colin (University of Toulouse and INSA), at 1:30 p.m. Organized by ME and the French Embassy in Ankara.

For information about meetings and activities of university departments or student clubs, please see their websites or social media accounts, or contact them directly via telephone or email.