Finnish Folk Metal in a Nutshell

Folk metal is a rapidly growing scene that has been gaining the attention of the metal community for the last two decades. The genre borrows many ideas from local folk music and uses folk instruments with metal musicianship. There is no typical folk metal sound, since it varies significantly according to the origins of the bands. Some of the most popular scenes are Finnish, Scandinavian, Celtic, Slavic and Oriental, among which the first three are the most developed and most popular. To be honest, my musical knowledge isn’t very profound when it comes to some of these, but I had a period where I listened to Finnish and Celtic folk metal all the time.

In this column, I want to talk about my favorite Finnish folk metal albums. The scene has been quite active lately, and long-awaited albums from Ensiferum and Korpiklaani are scheduled to be released very soon. So, I am reviewing my favorite albums by these two bands, and hoping that in their new releases they will have managed to come up with even better records than these classics from the genre.

Korpiklaani – Voice of the Wilderness & Tales Along This Road 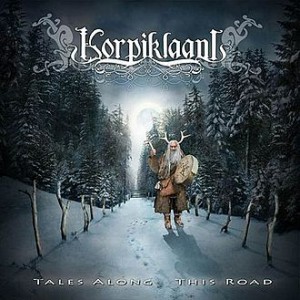 Korpiklaani (Finnish for forest clan) is one of the genre’s most folk-oriented bands. They use the accordion, violin and keyboards along with typical metal instruments. The lyrics of their songs tell pagan Finnish tales or depict the everyday life of Finns in earlier times. The songs generally concern topics such as hunting, pagan rituals, the celebration of nature, etc.

The band’s most notable releases are “Voice of the Wilderness” (VotW) from 2005 and “Tales Along This Road” (TATR) from 2006. These albums came at a point well into their career, but I think they are the first releases where Korpiklaani had mastered their style and found their unique sound.

VotW has a remarkably happy atmosphere, which is quite rare to see in metal music, except in this genre. With the appearance of bagpipes, Finnish chants and a few local folk instruments, this record feels like a collection of ancient celebration songs. The album mostly narrates stories about Finnish celebrations, hunting and nature, with a very uplifting atmosphere and catchy songwriting. The most notable aspect of the album is the impressive musicianship on all the instruments and the creative compositions, which make great use of this sonic diversity.

With TATR, their follow-up to VotW, Korpiklaani managed to improve their musicianship and satisfy the high expectations they had created. One of the problems in their

previous releases had been inconsistency. Although the songs had in common a happy and uplifting atmosphere, the variations in sound between the tracks tended to interrupt the cohesion of the albums. TATR is the first album where they managed to solve this issue, while keeping the musical quality at least as high as that of VotW. 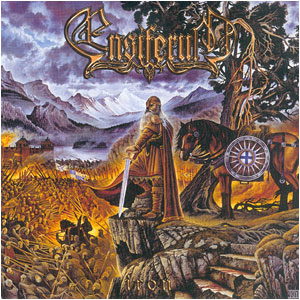 Ensiferum’s style can be categorized as folk metal and melodic death metal fusion. The band’s compositions are much more melodic and much heavier than those of other folk metal bands. Ensiferum doesn’t make use of many folk instruments, but their lyrical themes and compositional style have significant folk metal influences. Instead of directly employing it, Ensiferum uses folk metal as a supportive element to enrich their sound. Their lyrics are based mostly on the heroic war tales of the pagan Finns. The epic atmosphere of the album bursts through the raw, brutal vocals of Jari Mäenpää, the heavily distorted, eerie guitars and the blasting drums. Their self-titled debut album was released in 2001, and their sophomore album, “Iron,” in 2004. These two albums are Ensiferum’s only releases before frontman Mäenpää left the band to found Wintersun. In spite of the impressive work of his successor, Petri Linroos, Jari’s era has remained my absolute favorite, making these two albums the band’s best for me.

With their debut, Ensiferum offered a surprisingly unique and mature sound. The album’s lyrics narrate the battlefield tales and heroic victories of Finnish warriors. The band borrows some ideas from the famous Finnish epic poem “Kalevala” and tells the story of its protagonist Väinämöinen in two of the songs. Along with the powerful narration, the album has a very raw, but still melodic sound. Sonically, the majority of the tracks provide a very melodic, heavy and atmospheric blend of death and folk metal. From time to time, the album slows down and gives the listener a chance to absorb the dense material with soothing acoustic interludes.

“Iron” has the same sound as the band’s debut, but this is now much more mature, and the compositions are much more detailed than those on the previous album. I think “Iron” remains the band’s best release. The album has a very diverse yet characteristic sound, with unique polyrhythmic drumming, Jari’s stunning vocal technique and memorable, melodic guitar solos. The acoustic sections are spread more homogeneously throughout the album, and the sonic variations are smoothed to form a more complete and cohesive record.

I actually also wanted to talk a little about Turisas, another favorite band of mine, but I decided to focus on Ensiferum and Korpiklaani in order to recommend their music just before their new records’ release dates. I hope Korpiklaani’s “Noita” and Ensiferum’s “One Man Army” turn out to be as good as the works I have reviewed here.