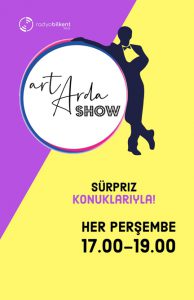 “Art Arda,” prepared by the Radio Bilkent news department and broadcast live every Thursday evening from 5 to 7 p.m. on 96.6 and at radyobilkent.com, is a talk show program featuring conversational games in which the host engages both a guest in the studio and members of the audience.

The program’s four-segment format calls for the guest to play several games. In the first game, “Who Would You Play?”, the guest is given a scenario and a list of characters, and asked which of the characters they would want to play in real life. During the second game, “Yes–No,” the participant is forbidden to say yes or no within the allotted time frame.

In the “Complete This” segment, the presenter recites the first few lines of a song’s lyrics, and asks the guest to name the song and continue reciting the lyrics from the point where they left off. Finally, “Familiar One” compares the guest’s answers to various questions with the answers previously given by family members without the guest’s knowledge.