While International Women’s Day takes place this Friday, March 8, women’s and gender issues come up for discussion year round in various settings on campus. For instance, last semester SFL405 Intercultural Business Communications course instructor Erin Maloney of the Department of Banking and Finance invited a panel of three faculty members from other departments to her class to address the topic. 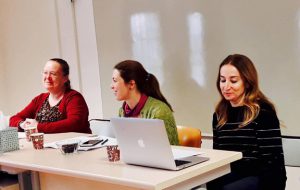 The discussion took place in a question-and-answer format, with Assoc. Prof. Sandrine Bergès (Department of Philosophy), Dr. Ceren Sibel Sayın (Department of Physics), and Assoc. Prof. Çağla Ökten Hasker (Department of Economics) answering students’ specific questions on gender issues, especially those pertaining to the workplace. (The course focused on issues to consider when negotiating in an international business environment.)

One student asked how to give more importance to the #MeToo movement when people scoff at complaints about sexual harassment, saying that it is not as bad as rape. Dr. Bergès noted that sexual harassment is still a crime, and used an analogy to make her point: while not as bad as burglary, stealing a wallet is still a crime; similarly, harassment is not “just flirting,” just as having your wallet stolen is not “just sharing.”

Another student asked how women can balance a career with family. Dr. Ökten responded that research has shown that, on their deathbeds, the greatest regret of men is not having spent more time with their children. So both men and women are better off when childcare responsibilities are shared more evenly.

When asked by a student about stereotypes, Dr. Sayın spoke about the glass ceiling in so-called “male” industries, such as the automotive industry, noting that even when a woman is the best in her field, because of circular reasoning she is often not allowed to hold a top position, purely because of gender.