25 February 2020 Comments Off on Generation Z Is All About Technology, Guest Speaker Tells THM Students 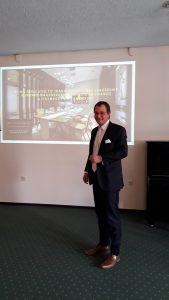 On February 20, Marc Schumacher, the general manager of the Ankara HiltonSA Hotel, gave a talk at the Department of Tourism and Hotel Management as part of the THM420 Seminars on the Tourism Industry course. In his presentation, titled “Be Dedicated to Transformational Leadership; Be Prepared for Generational Behavior Change and Its Impacts on Tomorrow,” he shared his experience and knowledge with regard to leadership. Mr. Schumacher, who is one of the youngest general managers in the Hilton chain, stressed the fact that technology is the future, as Generation Z is “all about technology.”

The talk began with an overview of the defining characteristics of Generation Z, the generation born between 1996 and 2010 and raised on the internet and social media. It is they, Mr. Schumacher emphasized, who will be the workforce of the future in the tourism industry, led by members of the previous generation, the Millennials.

He went on to note the differences between managers and leaders, stating that transformational leaders are replacing transactional leaders, who have focused on changing their subordinates instead of themselves. He also declared that a leader should be able to inspire, provide a vision and make subordinates aware of their importance to the company.

In concluding his talk, Mr. Schumacher stressed the role of emotional intelligence. To be successful, he said, transformational leaders need a high level of emotional intelligence, which relies on the “three Hs”: head, heart and hands. Therefore, a leader should think, observe and listen; emphasize, apologize and personalize; and act, exceed and ensure in order to be successful.