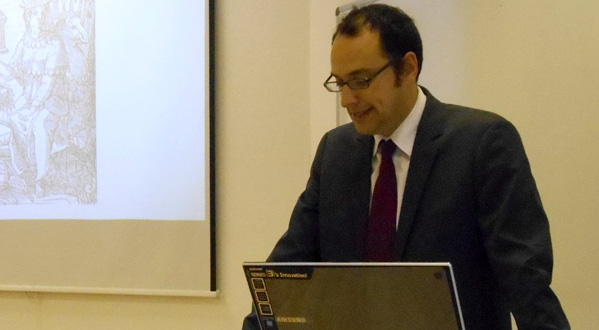 On November 6, Dr. Dominic Eggel, senior representative of the Graduate Institute of International and Development Studies in Geneva, Switzerland, gave a talk at the Department of International Relations. As well as introducing the Institute to a packed audience of IR faculty members and postgraduate students, Dr. Eggel delivered a talk entitled “The Idea of Europe From a Historical Perspective and Its Lessons for Today.”

During his talk, Dr. Eggel analyzed the notion of Europe from antiquity to the modern era, and elaborated on the idea of Europe as a geographic, civilizational and historical construct. He argued that to best understand Europe, its increasing integration during the 18th century through trade and cultural exchange is particularly relevant, not least because that was the time when structural integration occurred on the Continent.

Not shying away from the contemporary debate on Europe, Dr. Eggel asserted that the identity approach often invoked in analyzing Europe today creates an inside/outside dichotomy, which can lead to the exclusion of “the other,” however defined. According to Dr. Eggel, Europe should instead focus on defending a core set of norms and values, such as the universality of human rights and civil liberties.

The debate following the talk was chaired by Assoc. Prof. Serdar Güner, an alumnus of the Geneva Graduate Institute. A series of important questions were raised by members of the audience, contributing to a lively debate and a thoroughly fruitful exchange of views on the subject.