23 November 2021 Comments Off on GRA Students Meet in Costume

On November 12, students in the Department of Graphic Design gathered in the FB Building garden to celebrate Día de los Muertos, or the Day of the Dead – a holiday of Mexican origin traditionally celebrated on November 1 and 2. Weather conditions in Ankara resulted in the postponement of the festivities until the following week, but didn’t dampen the spirits of the participants. 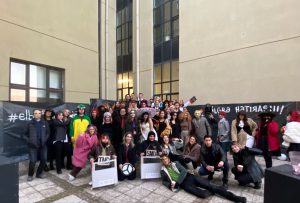 The celebration, El Bilgra Muerto (“Bilgra” being the department’s acronym), was organized by fourth-year students Doğukan Demirel, Bora Civelek and Zeynep Yeşilmaden, It included a “best costume” competition, with costumes representing the SMD and TMD campus shuttle buses, and also a “magic mushroom” costume, selected as the winners.

Graphic Design instructor Ekin Ezer Kılıç, who served as advisor for the event, explained that the Day of the Dead is celebrated in memory of the dead and that it is different from the better-known Halloween holiday, although celebrants of both often dress in costumes.

Ms. Kılıç also noted that this was the department’s first in-person event following a long period of predominantly online activity, bringing students from all classes together for face-to-face interaction at last. She said that perhaps the Day of the Dead celebration could become an annual event on campus, hosted by the Faculty of Fine Arts.