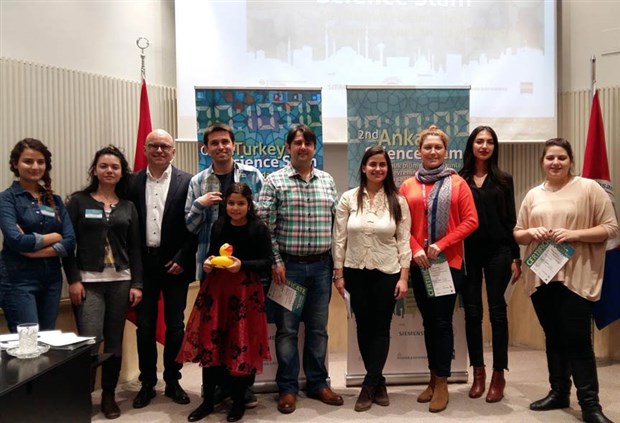 On December 9, the Department of Communication and Design, in cooperation with the German Embassy, hosted the second Ankara Science Slam. In a science slam, scientists compete with each other to present their research topics to the public in a way that is not only accurate but also entertaining and understandable. This year’s Ankara Science Slam was the opening event of the first Grand Science Slam Turkey, a competition for university students.

The Ankara Science Slam began with welcoming remarks by Prof. Ayhan Altıntaş, dean of the Faculty of Fine Arts, Design and Architecture, and Martin Erdmann, Germany’s ambassador to Turkey. Dr. Lutz Peschke, an instructor in the Department of Communication and Design, then introduced the six candidates competing for the “science bridging people” trophy. Among them were three “slammers” from Bilkent University.

According to the rules of the competition, presentations had to be completed within 10 minutes; the winner would be chosen by audience vote. In recognition of the United Nations Climate Change Conference then taking place in Paris, the participants were also required to explain how their research could contribute to climate stabilization and environmental protection.

The level of all presentations was very high. In the end, the audience chose Emre Demirezen from METU as the winner. Bilkent students, Merve Mutlu from the Department of Molecular Biology and

Genetics came in second, Öykü Dulun from the Graduate School of Education third and Ersin Hüseyinoğlu from the Nanotechnology Research Center fifth. All candidates received a certificate presented by Ambassador Erdmann.

In the first round of Grand Science Slam Turkey, six regional science slams will take place between December 2015 and April 2016. The winners of the regional events will go on to the finals, to be held on April 26 in İstanbul at the summer residence of the German ambassador in conjunction with the Public Communication of Science and Technology 2016 Conference. The winner of the Grand Science Slam will receive a journey to Berlin for two persons.