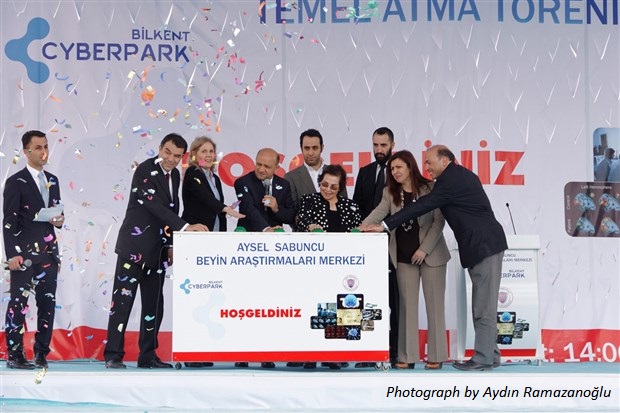 The groundbreaking ceremony for the Aysel Sabuncu Brain Research Center took place at Bilkent Cyberpark last week on April 30, with Minister of Science, Industry and Technology Fikri Işık in attendance.

The center has been established through a donation agreement between philanthropist Aysel Sabuncu and Bilkent University.

In the center, whose purpose will be to discover how the brain functions, scientists from Turkey and abroad in the fields of medicine, physics, molecular biology and genetics, psychology and engineering will conduct research. The center’s focus will be on the learning ability of the brain, and thus the research carried out there is anticipated to have a significant impact in the area of education.

Speaking at the groundbreaking ceremony, Bilkent’s rector, Prof. Abdullah Atalar, said, “It is expected that the mystery of how the brain functions will be solved this century. We believe this center will make a significant contribution to brain research worldwide.”

Ms. Sabuncu also expressed her hopes for the center that would bear her name, as well as her satisfaction at partnering with Bilkent. “Today, Bilkent University is breaking new ground. I feel very optimistic about joining with the university in this endeavor. I believe that the researchers, scientists and students who will work in this center will be the ones to discover the workings of the brain.”

Such hopes were well-founded, noted Mr. Işık, referring to the accomplishments of institutions established by Prof. İhsan Doğramacı. “We all know that Bilkent University has made significant contributions to the development of Turkish science and technology. I would like to take this opportunity to pay tribute to Prof. İhsan Doğramacı. He first founded Hacettepe University, and then, with Bilkent, established a university that has had notable success in educating world-class scientists and contributing to scientific and technological advances in this country. We have every reason to hope for more of the same from Bilkent in the future.”

The Aysel Sabuncu Brain Research Center will be open to researchers from all universities, which means it will function as a national center. The center will also be supported by UMRAM, the National Magnetic Resonance Research Center at Bilkent.

Construction is scheduled to be completed within a year. The Sabuncu Center will be the first such facility in Turkey and will be located in Bilkent Cyberpark.