Günköy Volunteers Make a Difference for Children in Amasya 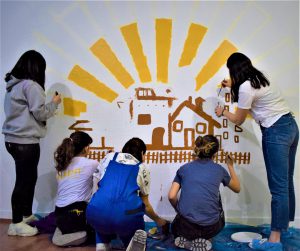 Volunteers from Günköy (The Sun Rises From the Village), a project of the student volunteer organization TDP, recently spent a weekend working at Uluköy Şehit Komiser Mustafa Düzgün Middle School in the village of Tasova, in the province of Amasya.

The volunteers’ work actually began in Ankara on the evening of Friday, March 8 when, promptly at 5 p.m., they began carrying books and construction materials to the bus that would take them to Amasya. The loading operation took over two hours, after which the 42 students who were making the trip boarded the bus, reaching their accommodations after a six-hour journey.

Waking up early Saturday morning, they went to the school, where students and parents were eagerly awaiting them. Their motivation increased even more by their hosts’ enthusiasm, the Günköy volunteers – organized into a construction crew and six instructional teams – immediately got to work.

While the construction crew busied themselves converting a large room in the school into a library, the other volunteers led the schoolchildren in music, theater, art, culture, sports and science activities designed to open new horizons for them.

“We worked the whole day without even knowing what fatigue was,” declared one volunteer. “The children’s willingness to learn inspired us.”

In the evening, the volunteers and children danced together in the schoolyard; the construction crew decided to stay on the job for nearly four more hours, forgoing sleep.

The work and activities continued on Sunday, culminating in a play, a concert and, in the evening, the opening of the new library, attended by children, parents, volunteers, the school principal and the village mukhtar. The children were clearly delighted by the library, full of books and color; the construction crew had also painted and decorated the school’s hallway. “Seeing the happiness on the children’s faces was priceless,” said a volunteer.

After an emotional speech by the principal to conclude the evening, the volunteers said good-bye to the school and the village and set off for Ankara, feeling the satisfaction of a job well done. 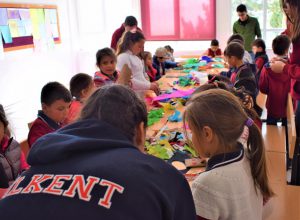