Sometimes it’s not so easy to motivate yourself.

You feel like something needs to come and find you and force you to think. And to think, to imagine, to feel, you need motivation, too. And the type I’m talking about isn’t always that YouTube talk about careers that makes you go and study. Sometimes it’s other things that you need motivation for. Calling your parents, seeing that friend you haven’t seen for a long time, investigating that thing you had in mind but kind of forgot.

In those moments, what often finds me is an album. In today’s world, where you can access so many singles on the radio and so many playlists via various music applications, an album is still like a story that you listen to. In fact, I find listening to a whole album very similar to reading a book. That’s why, although I’m not a music columnist, what I’m writing about today is an album – only because it’s motivated me a lot over the last several days.

Mike Rosenberg is an English singer–songwriter. He performs that naïve, soft folk music, with a notably acoustic sound. He’s that one man on the stage with his acoustic guitar, although most people know him as a band, since his stage name is “Passenger.” I remember thinking that way as well when I first encountered him through his song “Let Her Go.” You probably just realized who I was talking about when I mentioned that song, didn’t you?

He uses the name Passenger because music makes you take a journey, as he says, and also because when he’s on tour, he goes around and tells stories like the bards did in ancient times. A passenger talking about people familiar to us, but from different places that we may not always reach and see with our own eyes. I feel like those beautiful lyrics he sings in every song always tell a story of someone I’ve never met but who seems familiar. And that’s why his albums are like books, with songs as chapters. 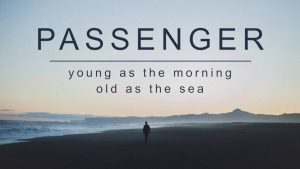 “Young as the Morning, Old as the Sea” from 2016 is my favorite (although yes, “Let Her Go” is on another album, from 2012). Interpretations may vary. To me, the album is about a young person knowing that he’s growing old, trying to look at his future self along with visiting his earlier memories in different songs. The album finishes with the song “Home,” where he ends the story back where he is right now: in the present.

Following are a few paragraphs with some of my thoughts about those two tracks as well as three others on the album.

Young as the Morning, Old as the Sea

It’s interesting to want to be both old and young. That’s the title of the first song as well as the album, and maybe a phrase that summarizes the whole intention of the story Rosenberg is telling. You grow up, and how do you feel? Like your mother with all her wisdom, appearing content with where she is and where she has been all this time? Like a sea, deep, wise and blue? Or is it more like your older brother, who seems to be struggling to stay young, who seems a little jealous when you do those “young” things, and who tries too hard to give you advice he believes will make you stay young, although time flies for everyone? Passenger seeks to be both.

When We Were Young

But oh how the years they vanish

I always wanted to learn Spanish

And travel round South America

Here he looks back at his old memories, remembering what he wanted before, comparing that to what he has achieved – but while doing that, he also doesn’t lose that naïve sense of looking at the past. It all feels so much smoother and more peaceful when you imagine yourself in the past, and maybe that’s what he’s doing. The romance of nostalgia, the thrill of past mistakes – it’s all there when you dare to take a look at your younger self.

Give me golden afternoons in May

Give me silver moons that light my way

With these two songs, I believe we’re now looking at the future. We’re meeting an old man, who has walked a long road, who has seen pyramids, who has been in Vienna to celebrate Christmas – who has done so much of what many people can only imagine themselves doing. Yet, he looks so lonely. Passenger describes him, and he makes us all try to look into the future and realize that this lonely picture isn’t one we’d be happy in. That old man walking a long road is tired; he has been doing many tiring things, like we all do. That’s why I said motivation shouldn’t always be something that makes you work harder to do those kinds of things. It should also be there to make you remember other things in life that matter, like family, friends and love, so that you won’t want to walk on for “fool’s gold” anymore.

When I start feeling sick of it all

It helps to remember I’m a brick in a wall

Who runs down from the hillside to the sea

When I start feeling that it’s gone too far

I lie on my back and stare up at the stars

I wonder if they’re staring back at me

The coda of the album: the final song. And the whole story is there once again, to take a powerful bow.

It was great to meet young people, old people, to visit the past and try to see the future. But in the end, we’re just here, where we lie on our backs and stare up at the sky. That’s it. The future is scary; it’s far above like the stars, though it blinks at you and stares back at you. Here you are on the ground like you’ll always be, and it’s going to be okay. It’s just beautiful to be here, in the present.