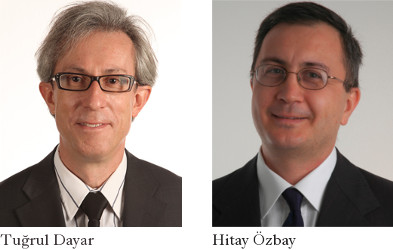 Prof. Tu?rul Dayar of the Department of Computer Engineering and Prof. Hitay Özbay of the Department of Electrical and Electronics Engineering have been appointed associate provosts for the university. Effective March 15, Prof. Dayar will take over the position currently held by Prof. Nesim Erkip, with Prof. Özbay to assume the post held by Prof. Cemal Yalab?k on April 1. Prof. Erkip and Prof. Yalab?k have decided to return to their scholarly pursuits on a full-time basis.

Tu?rul Dayar received a BS degree in computer engineering from Middle East Technical University in 1989, and MS and PhD degrees in computer science from North Carolina State University in 1991 and 1994. Since 1995, he has been with the Department of Computer Engineering at Bilkent, where he is now a full professor. While at Bilkent, he has received an Alexander von Humboldt Foundation research fellowship, a Young Scientist Award from the Turkish Academy of Sciences and an Incentive Award from the Scientific and Technological Research Council of Turkey. He has also taken sabbatical leaves of one year each at the Technical University of Dresden and Saarland University in Germany. His research interests are in the areas of performance modeling/analysis and scientific computing with applications to bioinformatics and computer networks. His book entitled “Analyzing Markov Chains Using Kronecker Products: Theory and Applications” was published by Springer in 2012. He is a member of Upsilon Pi Epsilon, AMS and SIAM (Activity Group on Linear Algebra), and a senior member of ACM (Special Interest Group on Measurement and Evaluation) and IEEE (Computer Society). During the last three years, he has served as the university’s associate dean of engineering responsible for student affairs.

Hitay Özbay received a BSc degree from Middle East Technical University in 1985, an MEng degree from McGill University in 1987 and a PhD degree from the University of Minnesota in 1989. Prof. Özbay was with the University of Rhode Island (1989-1990) and The Ohio State University (1991-2006), where he was a professor of electrical and computer engineering, prior to joining Bilkent University in 2002, on leave from OSU. His research interests are in robust control; he has published two books and over 200 refereed papers in edited books, journals and conference proceedings. Prof. Özbay has served as an associate editor for IEEE Transactions on Automatic Control (1997-1999) and Automatica (2001-2007). He was a member of the Board of Governors of the IEEE Control Systems Society (1999 and 2013) and a vice-chair of the IFAC Technical Committee on Networked Control Systems (2005-2011). Currently, he is on the editorial board of Automatica (since 2012), the SIAM Journal on Control and Optimization (since 2011) and the Springer book series “Advances in Delays and Dynamics” (since 2013).