How & Where They Write: Ioannis Grigoriadis

14 April 2014 Comments Off on How & Where They Write: Ioannis Grigoriadis

Alp Rodoplu: Do you enjoy writing?

Ioannis Grigoriadis: I do. Writing brings our ideas and our intellectual struggles into existence. We give shape to what we think through writing, and in that respect it is a very enjoyable process for me. In addition to academic writing, I also—perhaps unlike most Bilkent professors—engage in opinion-piece column writing, for an leading Greek daily, “Kathimerini” (2.02), maybe twice a month, and for Taraf every other week. There is an intensity in the writing process of these shorter pieces that I greatly enjoy. The target group and the instruments are different, but the joy of trying to develop an argument in such a completely different context, in perhaps 500 words or so, is a commonality. In academic articles, words are at your disposal in the thousands to develop ideas, and if you write a book, they increase to 50, 60, 80 thousand. However, trying to condense one or two important topics in language that will appeal to the public—not the students, not the experts, not even the educated readership of a country, but millions of people—is interesting.

AR: You enjoy writing, but do you know exactly what you are going to say, or is writing also a process of exploration?

IG: Don’t forget that we think in words! So writing is a way of thinking, in a sense. Also, you often begin with a broad idea and can fine-tune it only during writing. Some of the best ideas come during the writing process. Sometimes my ideas unfold very smoothly, and benefiting from this, I can write quickly. But I believe one can think by and through writing. 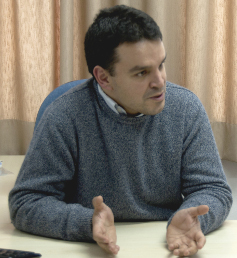 AR: Given that thinking and writing can be closely intertwined, how much does where you write affect this relationship? Is there some place you choose to write?

IG: It depends on the topic, and because of multiple obligations I have to create unconventional conditions or circumstances for writing—like writing on the plane. I often write my columns on short air trips, because unlike academic articles, writing a 500- or 600-word piece in an hour and a half is relatively easy if there is an idea. Normally, I write in my office or at home. I also enjoy writing with music, like classical music, in the background. Some find it distracting, but to me it is rather helpful.

AR: Do you ever get stuck?

IG: It happens, but what is important then is taking a break and canalizing your energies toward something else. Writing something else helps me distance myself from a deadlock and then I often come up with a solution. Also, circumstances force me to multitask and work on several projects at a time; therefore, I’ve never experienced a complete halt.

AR: Is there a period between the time you do your research and your writing? Or do they go in parallel?

IG: For me, there is no clear-cut division between doing research and writing. I think sharing ideas with colleagues, whose opinions one trusts, is very important in this process, especially to further develop ideas. But writing is conditioned by circumstances, which means in my context that I cannot be full-time writer; for example, I also have to teach. But something I very much enjoy at Bilkent is the relatively light teaching load—a contrary case to most Turkish universities. So we do not encounter the very ugly dilemma of having to decide between being good instructors or good researchers.

AR: The impression I get is that writing is quite straightforward for you.

IG: Well, if you follow the news or read books, ideas and questions pop up in your mind. These are things that are burning inside people, so writing is a way to heal this. I have a friend, who is a very experienced journalist, who said that writing is like psychotherapy; it makes you feel better. Putting words on paper makes people think that they are doing something, contributing to a debate, drawing attention or raising awareness, which provides some sort of relief.

AR: The word you used was “heal,” so is writing is somewhat cathartic?

IG: In the classical sense, yes. Writers are affected, sometimes overwhelmed, by what they read, and tackling big questions via writing is a way to contribute, even minutely, to better understanding the world and solving its problems. And the feeling accompanying this is one of healing in a sense.

AR: And I assume because of your field there are constantly new questions to ponder and write about.

IG: Absolutely. I think that writing is always about trying to tackle great questions, and such questions may have been bothering someone for a long time. This is actually another parameter of my writing. Having been born and raised in Greece, and having worked in Turkey for several years now, I try to provide a dispassionate, fair approach to undermine or debunk longstanding prejudices each has for the other. But sometimes events unfold quickly, and there is limited time to react; so sometimes I write pieces quickly, because I feel I must respond. It is not as if I have to meet a deadline, but it is just that I feel obliged to do this. It is important for me to determine my position, locate myself within the debate and contribute to it. And that is the cathartic element, because when you start writing, it feels like you have done something. Especially in the early phases of their careers, the enjoyment of hearing someone say that they know you from your writing only adds to this feeling.

AR: So, when you think you have to write something quickly and get it on paper, do you write in Greek?

IG: Not any more, because most academic writing is in English. Apart from the newspaper stuff, I only sometimes write in Greek—that is when I contribute to chapters in Greek edited volumes or books. But since most of our professional writing is in English and instruction at Bilkent is in English—and my work also has to available to my colleagues and students—I stick to English.

AR: Most people I interview are not native English speakers like you. So I wonder whether you have any difficulties when you write in English?

IG: It has not been easy. I did my BA in Greece, in Greek, and I remember being scared about my English when I first went to New York to do my master’s at Columbia. Initially, I often thought I had more things in my mind than I could express, which was frustrating. Eventually, I overcame the situation, and maybe New York helped me, because while being so concerned about my English, I soon realized that I spoke better English than half of New York’s population! So I thought, if they live here, if they are citizens [and speak like this], then I have no problem.

AR: I always ask this question regarding language, and when I started asking it, I expected something in the negative, or at least neutral. To my surprise, the response is often quite positive: people seem to like writing in English; it is simple and straightforward.

IG: I wouldn’t necessarily argue in favor of the qualities of writing in English, but I would make a utilitarian argument. If I write something in Greek, you will not be able to read it and the outreach of my ideas would by definition limited. Think of Greek, spoken by 12-13 million people, or even Turkish with its 70-75 million speaking it—and now, think of the audience you get when you write in English. So I think this is an important argument, especially if the argument we made before is valid, i.e., that you write because you feel like expressing yourself, and you hope that you can share your ideas with as many people as possible. I have also enjoyed writing some academic articles in German; and if you were to ask me, I would prefer German over English. But again, even with German I’d be limiting my audience to a relatively small population.

AR: And lastly, is there anything you wish to say to aspiring Bilkent writers?

IG: Do not be afraid of writing. Many people take writing too seriously. Its importance should not a source of discouragement, especially today when writing and publishing is so easy and cheap. For instance, writing an article for a newspaper was once a rare privilege; now, you see newspapers suffering because the internet has superseded them, filling the gap of the monopoly they formerly enjoyed. Now, any Blogspot or WordPress page can provide someone with a venue to write, share ideas and participate in the global exchange of ideas. So my advice is that they should not to hesitate to take the initiative and the steps toward writing. And as I said before, in some cases writing can be therapeutic as well.