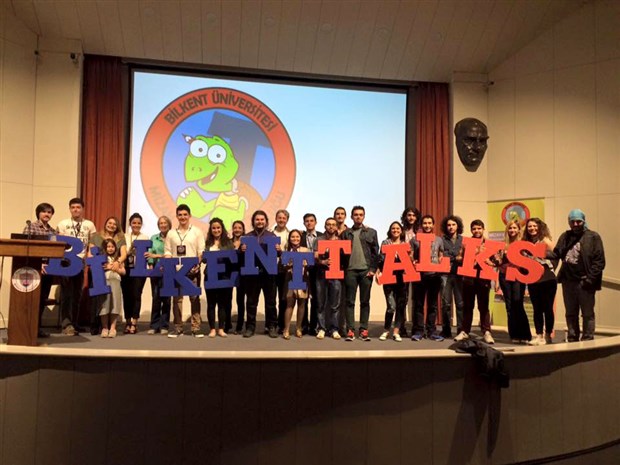 The Bilkent Humor and Culture Club has held another of its “Bilkent Talks” events, the third in the sequel. BilkentTalks serves as a forum where all Bilkenters can share their opinions, tell their stories or criticize whatever they wish on stage in front of a large audience. The talks are also recorded for uploading to the YouTube BilkentTalks channel; the most recent talks will soon be available for viewing there, as well as at mizahkultur.bilkent.edu.tr.

BilkentTalks-3 was held on April 5 at Mithat Çoruh Auditorium, with the speakers comprising a variety of Bilkenters including academicians, graduate students, undergraduate students, librarians and other staff members. The event was divided by an intermission into two parts, each consisting of four talks.

The first four speakers were William Sawyer, Barbara Gülen, Ebru İnanç and Egemen Eres. During the intermission that followed, the Humor and Culture Club hosted a reception where audience members had a chance to further discuss the talks’ content with the speakers. After the break, Fırat Yıldız, Dilara Kuni, Emre Bilgiç and Beyza Bener made their presentations.

Attendance at the event was the largest yet for BilkentTalks, with later arrivals struggling to find empty seats and some having to stand. Club members and the organizing team expressed their gratification at seeing such interest in BilkentTalks and their excitement about how big this forum has become.

BilkentTalks is clearly on its way to becoming a regular event on the calendar of student club activities at Bilkent. Preparations for Bilkent Talks-4 are already getting underway, and the Humor and Culture Club welcomes all Bilkenters who would like to express their ideas and share their thoughts to be a part of it.

In the meantime, the club’s next project is publishing the third issue of their humor magazine Tosbaa. The issue will be coming out soon and will be available free of charge at many locations on all three Bilkent campuses.

Also, the deadline for the Write & Draw Bilkent Contest, which the club is holding in cooperation with the Bilkent University Library, has been extended to May 6. Submissions are being accepted in three categories—poetry, caricatures and essays—with a variety of prizes for each category.

To learn more about Humor and Culture Club activities and keep up with the club’s latest news, you can visit its website and follow its social media accounts: