03 March 2020 Comments Off on Hygge, a Happier Lifestyle

I’ve always liked the cold weather and taking walks in the misty atmosphere that descends on Ankara after September. Since we’ll soon be moving on to a new, warmer season, I wanted to offer one last appreciation of the cold weather in its final days by turning your imagination toward Denmark.

A lifestyle called “hygge” – roughly translated as “cozy” – created by the Danish is very popular these days around the globe. When I investigated it, I discovered that anyone can adapt certain aspects of this lifestyle to their own culture. In any case, it seemed enjoyable to think about happy people living in a distant place with a different lifestyle.

Since the publication of the first World Happiness Report in 2012, Denmark has consistently ranked among the top three in this listing of “happiest” countries; it was number one in 2012, 2013 and 2016. Of course, Denmark’s environment of social equality and its well-organized education system have a positive impact on happiness levels. However, other Nordic countries with similar social environments, such as Sweden, sometimes rank lower on the happiness list. Perhaps part of the reason for the Danes’ success lies in the way of life that they call “hygge.” Today, millions of people around the world are trying to learn something from the Danish and warm their souls with this lifestyle.

Although it has no exact equivalent in other languages, hygge can be defined as “the art of creating sincere, warm environments.” The word first appeared in Danish writing in the 19th century; since then, Danes have described their culture in terms of hygge.

Hygge is coming together by the fire, getting warm by singing songs, and wearing comfortable clothing, but it’s also more than that. It involves creating an environment where you feel safe, and trying to be with your loved ones as much as possible. So, it’s actually an approach to life in which you prioritize peacefulness and human connections to the greatest possible extent.

It’s true that Danish people use candles, blankets and a glass of glögg (a traditional drink wonderfully scented with cinnamon) to create a comfortable atmosphere during the country’s cold, dark nights. According to the hygge philosophy, however, comfort doesn’t only mean lying on soft sofas and wearing loose clothing and woolen socks. You should also spare time for yourself and your loved ones, and find activities to relieve the stress of the day. Don’t let your fast pace of life make you feel guilty while relaxing. Rest when you need it. Try to make your daily life more stress-free. Avoid frustrating controversies. Be in touch with nature, and take walks that relax you. 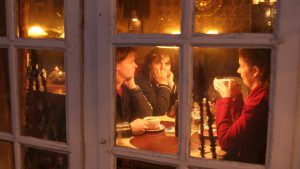 A sense of “equality and togetherness” is important for hygge. It is imperative that everyone sees themselves as part of the environment, able to meet on common ground without feeling like a guest. In cold weather, people who value hygge often come together by the fire and spend quality time with each other. They take care to be open and inviting, to support each other. Again, the main goal is to create a safe haven and to invite the people you love, do the activities you love and feel as comfortable as you can.

I personally know that it isn’t possible to be that optimistic about life all the time. However, reading about hygge coincided with a period in my life in which I was trying to make an important decision. In this process, it was actually very helpful to prioritize the option that I felt the most comfortable with. Wherever feels like home, they say, try choosing that.

Meik Wiking, CEO of the Happiness Research Institute, introduced the hygge philosophy to the world as author of “The Little Book of Hygge: Danish Secrets to Happy Living,” which was published in 2016 and became an international bestseller. In the book, he discusses the concept of hygge in detail and encourages the reader to create their own hygge. Referring to the book, the New York Times wrote, “You have an appointment with the happiest man in the world; listen to him.” Trying to implement Wiking’s suggestions step by step as you read the book can be a good start for achieving hygge.