09 March 2021 Comments Off on In Place of Concerts, Turkish Classical Music Society Offers Lectures and Interviews

In normal times, the Turkish Classical Music Society, a Bilkent student club founded in 1999, holds a concert at the end of each semester, with club members performing as vocalists or instrumentalists. But, as in so many aspects of life, the pandemic changed that.

Since the society is unable to hold concerts for the time being, they are instead presenting lectures and seminars on Turkish classical music, as well as conducting interviews with musicians known for their work in the genre. On February 28, the club welcomed members of İncesaz, an ensemble devoted to promoting the greater recognition and further development of Turkish music. 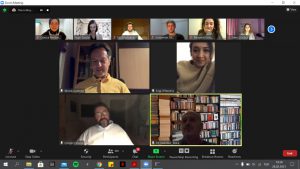 İncesaz founders Murat Aydemir and Cengiz Onural and soloists Bora Ebeoğlu and Ezgi Köker talked about a variety of topics, including the establishment of the ensemble, their careers in music, the process of composing a new song and their sources of inspiration. They also answered questions that came via social media from club members and other listeners.

The members of the Bilkent Turkish Classical Music Society are eager to give a concert as soon as the pandemic is over. Meanwhile, they will continue to conduct interviews, lectures and lessons. Information about these events can be found on the GE250/1 lists, in BAIS emails and in the social media accounts of the club at linktr.ee/ktmt.bilkent