International Student Skits Show Funny Side of Life in Turkey 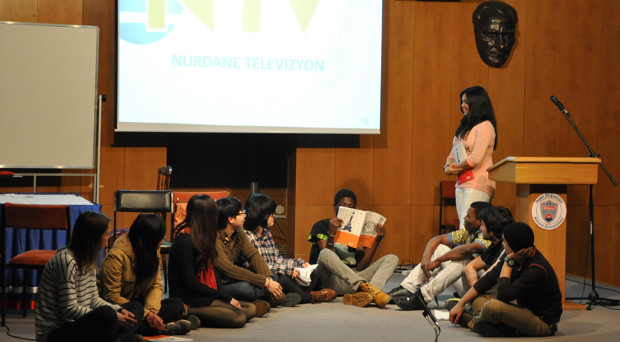 On December 11, international and exchange students who are taking Turkish 111 and 112 performed short plays in Turkish as their end-of-semester presentations. The students impressed the audience with their creative, entertaining scenarios. The event, which also included a talent show and some short films, took place in C-Block Auditorium.

The skits depicted amusing incidents experienced by international students in Turkey due to linguistic misunderstandings or unfamiliar Turkish customs. One sketch featured a “Romeo and Juliet” scenario, with Romeo as an American exchange student and a Turkish Juliet. Other plays depicted students ordering food in a local restaurant, applying for a residence permit, getting used to life at Bilkent and watching Turkish television.

In addition to the skits, the students put on a talent show, giving them the opportunity to demonstrate a variety of skills, and screened short films they had made.