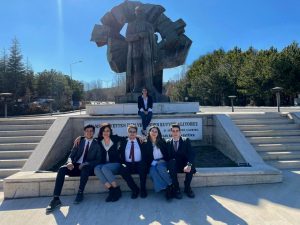 Five Faculty of Law students, representing Bilkent University as its Vis Moot team, advanced deep into two of the biggest international commercial arbitration moot court competitions, receiving a number of awards in the process; they also did very well in the pre-moot competitions preceding the two major events. The team’s achievements marked a new milestone for Bilkent at the international level.

The Vis moots are considered to be among the premier moot court competitions in the world and attract participants from universities around the globe. While Vis East is usually held in Hong Kong, and Vis in Vienna, both events were held virtually in 2020 and again in 2021.

This year’s problem involved the application of the Swiss Chambers’ Arbitration Institution arbitration rules and the UN Convention on Contracts for the International Sale of Goods to a dispute over a hybrid contract involving the licensing and sales of viral vectors for a COVID-19 vaccine.

The five students on the Bilkent Vis Moot team began their work in August 2020, and drafted a total of four claimant’s and respondents’ memoranda upon the publication of the competition problem in October 2020. The culmination of their eight-month journey came in March 2021, when they virtually pleaded their case in the two global competitions.

This year’s Vis East competition took place March 14–21, with 147 universities participating. In this, the first time Bilkent students took part in Vis East, the team advanced to the quarterfinal rounds, the only team from Turkey to do so. They received an honorable mention for the Eric E. Bergsten Best Team award, with Elifsu and Tuna also receiving honorable mentions for the Neil Kaplan Best Oralist award.

The Vis competition was held March 27–April 1, with close to 2,500 law students from 382 universities taking part. The Bilkent team, which has been a regular participant in the Vis Moot since 2005, advanced to the top 16 for the first time, becoming the only team from a law school in Turkey to do so in the event’s 28-year history to date. Here, too, the team received a Bergsten Best Team honorable mention.