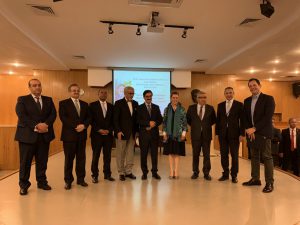 On April 25, Bilkent University hosted Dr. Hamad bin Abdulaziz Al-Kawari, deputy prime minister of the State of Qatar. Dr. Al-Kawari was on campus to give a lecture on the topic “Cultural Diplomacy Between Theory and Practice: Qatari–Turkish Cultural Ties as a Model” as part of a seminar series organized by the Department of International Relations.

Dr. Al-Kawari began his talk by reviewing the deep historic ties between the State of Qatar and the Republic of Turkey. He referred to the role of the Ottoman Empire in the 1913 Anglo–Ottoman Agreement, in which Qatar’s right of self-determination was defended by the Ottomans, and described the way in which this agreement paved the way for the emergence of the modern state of Qatar.

Turning to his own more than half a century of experience in international diplomacy, Dr. Al-Kawari stated that he has come to the conclusion that the golden rule of intercultural communication and interaction is “cultural diplomacy.” Offering “the gift economy” as a prime example of cultural diplomacy, he stated that such gifts are more than material objects, being the perfect means for cultural exchange and understanding.

Citing the impetus for closer relations provided by the Qatar–Turkey cultural year in 2015, and the subsequent rising demand among members of the Qatari public to learn the Turkish language, Dr. Al-Kawari illustrated the way in which cultural diplomacy may prompt cultural communication and also form a basis for cooperation.

In conclusion, Dr. Al-Kawari emphasized the position of universities in cultural diplomacy, remarking that their role is not less significant than that of politicians, in that academic and scientific exchanges serve as the “soft power” that can contribute to the development of societies by establishing dialogue among people in the course of disseminating knowledge.

Following his talk, Dr. Al-Kawari answered questions from students and was presented with a gift from Bilkent University. Seminar attendees then enjoyed a reception held in T Building, where the talk took place.