Starting from the late 60s and continuing until the end of the 70s, British prog-rock bands produced dozens of great records. Bands like King Crimson, Genesis, Yes, Pink Floyd, Camel, Emerson Lake and Palmer, It’s a Beautiful Day, Gentle Giant and of course Jethro Tull (as well as many others) went beyond the standards of the day and contributed to the creation of a new genre, i.e., progressive rock. For me, Jethro Tull has a separate place among them all. That’s why I want to talk about Tull in this week’s column.

Jethro Tull was an English agriculturist who lived in the 17th to 18th centuries and was the inventor of the horse-drawn seed drill and the horse-drawn hoe; the band, formed in 1967, was named after him. Tull’s earlier work can be described as blues-oriented rock. Their debut, “This Was,” is the only album featuring Mick Abrahams, who left after that record and formed his own band, Blodwyn Pig. Although it is a great record and contains one of the key signatures of Tull’s music—Ian Anderson’s amazing flute playing—“This Was” does not fully exhibit the unique Tull style, which started to take shape after Abraham’s departure and can be heard in the following album, “Stand Up.” Then came “Benefit” and “Aqualung.” The latter features many Tull classics, such as “Aqualung,”  “Locomotive Breath” and “Cross-Eyed Mary.” 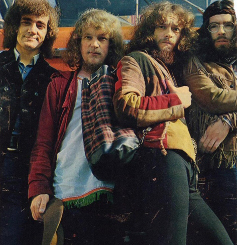 I have been a little bit swift in sweeping through the earlier Tull albums to reach my favorites: “Thick as a Brick” (TAAB) and “A Passion Play” (APP). You may remember TAAB from one of my previous columns, and if so, you will also know that it is one of my all-time favorites. TAAB is a concept album, “the mother of all concept albums” in Anderson’s own words. Actually a single song of over 40 minutes, it was divided into two approximately 20-minute-long tracks (one on each side of the record) in order to be able to release it in LP format. Both lyric- and music-wise, it is a true masterpiece. The same compliments also apply to APP. This album is again in a similar format, a single song divided into sections, and features the humorous, Monty Python-reminiscent “The Story of the Hare Who Lost His Spectacles” in the middle. Both records clearly show that Anderson is not only a great frontman and musician but also a legendary poet. I advise every music admirer to listen to these two albums with care—don’t worry, you’ll have no regrets!

I am again accelerating, and quickly skipping over three more albums (please don’t be deceived by this—each of these three records is really profound and great, but unfortunately there isn’t enough space here to talk about each Tull album separately) by just listing them: “War Child,” “Minstrel in the Gallery” and “Too Old to Rock ‘n’ Roll: Too Young to Die.” Then comes the folk rock trilogy: the first of the three is “Songs From the Wood” (SFTW), which came out in 1977. SFTW is the most “folkish” album in the trilogy, I guess because the instrumentation is mostly acoustic. Next is “Heavy Horses” (HH). HH and SFTW carry similar folk motifs in their lyrics, but HH is less acoustic. “Stormwatch” is the least folkish among the three, but this does not prevent it from being a superb record. 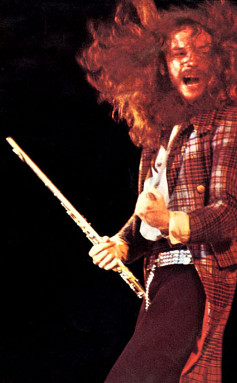 I will summarize briefly Jethro Tull’s post-80s era, since I believe that Tull, like every other prog-rock band, started producing less astonishing records after the end of the 70s—which of course does not imply they made below-par albums even then, since Tull’s post-80s works are still great, just not as great as the previous ones—by experimenting with different genres like electronic rock, hard rock, world music and many more. The problem of Anderson losing the full spectrum of his voice (though even with a limited spectrum he performed great songs) was likely one of the main reasons behind this change. One funny anecdote to be mentioned here has to do with Metallica’s loss to Jethro Tull in the 1989 Grammy Awards. That year rock and metal were still together in a single category; they did not become separate categories until the following year. Now comes the funny part: Tull’s record company Chrysalis responded to the criticism that Jethro Tull was not a heavy metal band by posting billboard ads, which had a picture of a flute and the words, “The flute is a heavy, metal instrument.”

To sum up the post-80s era, Tull released nine solid albums (the last one coming out in 2003). During the entire span of their music career, they experimented with many different genres, encompassing prog-rock, electronic rock, jazz rock, art rock, blues rock and many others. In my opinion, Ian Anderson is one of the most inspiring figures in the last 40 years of the music scene, with his musical genius, his poetry and his stage performances as a frontman. I would say that Tull’s pre-80s music is a must-listen for every ear. I strongly suggest that you give it a try and of course, as always, stay connected to music.