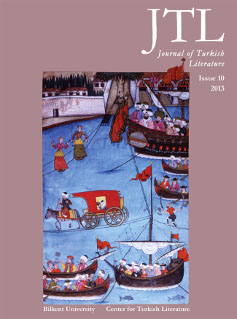 Edited by Prof. Talat Halman and assistants Berat Melih Kalender and Meriç Kurtuluş, the 160-page publication contains articles by Mehmet Karabela on the dialectical discourse in classical Ottoman literature; by Sevinç Elaman-Garner on “The New Turkish Woman and Her Discontents”; by Barry Tharaud on Yaşar Kemal’s “The Undying Grass”; by Zeynep Tüfekçioğlu on Ahmet Ümit’s “Patasana” as postmodernist fiction; by Mine Krause on Elif Şafak’s “The Bastard of Istanbul”; and by Simla Ayşe Doğangün on Elif Şafak’s “The Forty Rules of Love.”

The JTL’s Issue 10 is available for 45 TL (or 25 USD, or 20 EUR) from the Bilkent University Center for Turkish Literature in Ankara, Turkey (e-mail: temerkez@bilkent.edu.tr; telephone: ext. 2317).