“Abbas Güçlü ile Genç Bakış,” one of the best-known TV talk-discussion shows in Turkey, was held at Bilkent University on Wednesday, March 19. Bilkent had previously hosted the show in March of 2013.

This year’s program, broadcast from the Bilkent Concert Hall, was sponsored by the Brand Club and featured three prominent Ankara-based journalists: Utku Çakırözer (a Bilkent graduate) from Cumhuriyet, Deniz Zeyrek from Hürriyet Ankara and Hakan Çelik from Posta.

Mr. Güçlü, explaining why journalists had been chosen as guests, noted that they are firsthand witnesses of current political events. As for the significance of holding the program in Ankara, he stated that city is the heart of Turkey, and whenever Ankara is distressed, it is reflected throughout the nation.

The live broadcast, on Kanal D, started at 12:30 a.m. Due to the rising political tension in Turkey, the program was expected to generate considerable discussion. Indeed, despite the late hour, those students present for the broadcast showed great eagerness and interest in the topics discussed.

In his opening statement, Mr. Güçlü referred to the restrictions on pre-election discussion on TV, which unfortunately limited what could be said regarding the upcoming elections. Nonetheless, students managed to ask a number of relevant questions that did not violate the restrictions. 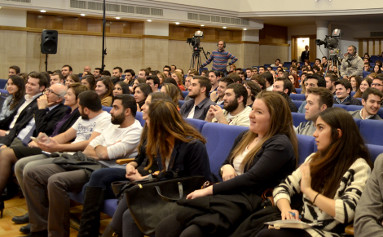 Mr. Güçlü went on to talk about the recent problems in parliament related to requests made by the opposition parties regarding the summary of cross-examinations concerning the four government ministers who were forced to resign after the emergence of corruption allegations in December. Mr. Zeyrek further elaborated on this topic, explaining how a fuller disclosure of the content of the proceedings had been postponed until after the elections, which could cause even more tension and problems in the parliament in the coming days.

The attitudes of political leaders and members of parliament in general, and the causes of the current troubling political atmosphere were the key points discussed throughout the program, along with the issue of what might happen after the elections, and the possible repercussions of the Gezi protests.

At certain points, the discussion became more intense, for instance upon a question concerning the way journalists and the media have been reporting events. Mr. Güçlü defended the majority of journalists and individuals working for media organizations, arguing that most of them in fact do their best to provide information and news to the public. Mr. Çakırözer supported this view, referring to the many journalists who have been imprisoned. However, he also found the question valid to the extent that it asked why some media corporations did not provide objective information.