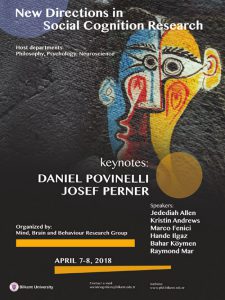 W.A. Mozart, Concerto for Piano No. 9 in E-flat major, “Jeunehomme”

“The Music Factory for Children”

“Spatio-Temporal Neuroimaging of Visual Processing of Actions in Humans,” by Burcu Ayşen Ürgen (University of Parma), at FEASS, A-130, 12:40 p.m. Organized by PSYC.

“Illustrating Turkey: Üç Boyutlu Kağıt İşler,” three-dimensional paper works by Angela Burns, at the Library Art Gallery. The exhibition will run until April 4 and will be open every day (except Sundays) between 10:30 a.m. and 6 p.m.

“Contested Identities in History: The Case of Turkey and Europe,” by Assoc. Prof. Senem Aydın Düzgit (Sabancı University), at FEASS, A-130, 12:30 p.m. Organized by POLS.

The Bilkent University Library is inviting all members of the Bilkent community to attend the “Academic Wednesday Series” hosted by Bilkent University and the Elsevier information analytics and publishing company. The series sessions, during which attendees can learn more about the Mendeley, Scopus and Science Direct databases, will take place in the Main Library Art Gallery.

Hosted by the Departments of Philosophy and Psychology and the Neuroscience program, a conference on “New Directions in Social Cognition Research” will be held on April 7 and 8.

Social cognition is an expanding field of study that has come to include researchers from the fields of philosophy, psychology, neuroscience and robotics. It focuses on describing and explaining how human, nonhuman and artificial systems understand sociality.