March of Mind and Drift of Genes: Philosophy Day Celebrated at Bilkent

25 November 2013 Comments Off on March of Mind and Drift of Genes: Philosophy Day Celebrated at Bilkent 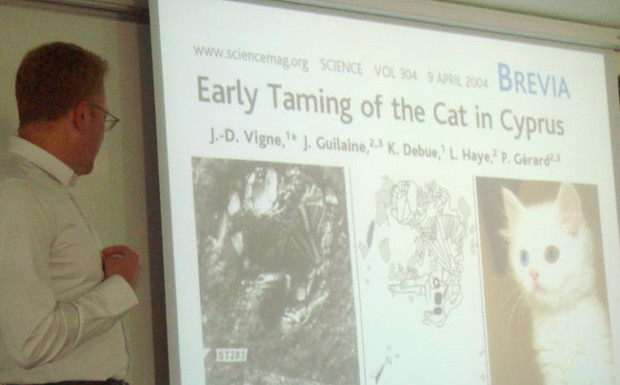 Last Wednesday, Bilkent’s Department of Philosophy celebrated World Philosophy Day with the ninth iteration of its annual series of talks, organized by Dr. Simon Wigley and focusing on the life and work of Darwin as they pertain to the modern scientific corpus of knowledge and philosophical schools of thought. After a brief welcome speech by Dr. Wigley, the conference opened with an introductionary talk by Dr. Varol Akman, who outlined Nagel’s concerns on whether scientific knowledge can ever be sufficient to yield satisfactory information about sensory qualia, as well as Darwin’s courageous anti-religious stance and promotion of freedom of thought based on advancement of science.

Acting as the vanguard of mathematical objectivism, Dr. Jack Woods’ focus was on the soundness of the mathematics-morality analogy, a line of thought that claims that mathematical facts are self-evident in the same way that moral facts are — that we have an a priori belief in the validity of mathematical functions in the same way that we have an a priori belief that murder is a reprehensible act. This would, in turn, make arguments against objective morality, such as the argument that moral laws are not necessarily valid because they may be ingrained in the human psyche by means of evolutionary constraints, also apply to the objectivity of mathematical facts. Dr. Woods, however, claims that a subtle but fundamental distinction exists between math and morality, in that such an argument against objective mathematics (but not objective morality) would have to take for granted what it seeks to disprove: It might be possible to claim that moral principles arose from evolutionary necessities without making any direct reference to the morals in question, while it is difficult indeed to conceive a line of reasoning by which the human intuition concerning the validity of mathematics is justified without appealing to at least some part of mathematics.

Dr. Katja Doerschner’s presentation, in contrast, was of a decidedly more neurological bent, and utilized the pronounced cortical malformations — and the curious absence of corresponding cognitive issues — caused by a single-gene defect to illustrate the complex association between genetics, brain morphology and the human mind. Mutations in the gene in question, LAMC3, create severe morphological defects in the occipital lobe, but those affected appear to suffer only relatively mild, and primarily attention-related, cognitive deficiencies — which suggests that the links between genetics and cognitive capacity are not as straightforward as they would seem, and that a multitude of compensatory mechanisms or mutually independent pathways may be in play to avoid or alleviate the deleterious effects associated with the loss of one component.

Even the Vikings made a triumphant return from last year’s proceedings: Dr. David Thornton’s talk focused on the effects of the Viking expansion on the genetic diversity of Europe and beyond, with emphasis on the use of mtDNA and Y-chromosomal haplotyping in tandem with historical, archaeological and genealogical evidence for the investigation of Viking colonization efforts. The seafaring lifestyle of Norse sailors, coupled with their tendency to settle down in new-found lands and take native-born wives, made them exceptionally capable of spreading their genetic heritage, and their legacy is now seen not only in the offspring they left behind, but also in the descendants of the shipboard rats that abounded in their vessels and conquered new territory even more effectively than their Viking benefactors.

The program then concluded with Dr. Çetin Kocaefe’s multifaceted discussion on the origins and spread of humans and domesticated animals. Ranging from the fabled Great Tumulus of Gordium to the taming of the first cats in the Middle East, from the desynchronization of Turkic genetic and cultural heritages during the Turkic migration to a lonely Cypriot fig that outlasted the Ottoman Empire and still stands as a witness to the impermenance of mankind’s achievements, Dr. Kocaefe’s far-reaching talk served as a fitting conclusion to the diverse array of topics and disciplines that characterized the day’s presentations.