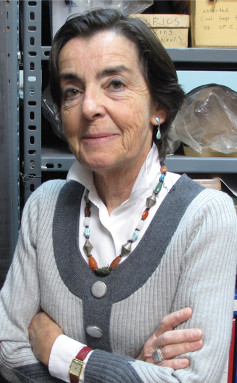 Marie-Henriette Gates, associate professor in the Department of Archaeology, has been named a Joukowsky Lecturer for 2013/2014 by the Archaeological Institute of America (AIA), North America’s oldest and largest archaeological association.  Founded in 1879, the AIA today numbers 100 local societies throughout the United States and Canada. The societies, based at universities, draw their membership from the interested public as well as academics in all branches of archaeology, classics, art history, history and anthropology. Each society offers a rich program of lectures, fulfilling  the AIA’s mission of informing the public about current discoveries in the many fields of archaeological research.

The annual Joukowsky lectureships have for 20 years honored Martha Sharp Joukowsky, professor emerita of archaeology at Brown University, past president of the AIA and current excavator at Petra in Jordan. Two Joukowsky lecturers are selected each year by the AIA’s program committee, and each gives one or several presentations to 13 local AIA societies. Marie-Henriette Gates began her tour in October 2013 in Montréal, Toronto and Omaha. In January 2014, she will complete her assignment with lectures to 10 more AIA societies, in Oregon, California, New Mexico, Nevada, Oklahoma, Massachusetts, New York and Ontario. She is offering a choice of four topics: three on different aspects of the Bilkent-affiliated excavations she directed at Kinet Höyük, Hatay (1992-2012), and a fourth on her reflections from forty years as an archaeologist in the Middle East.