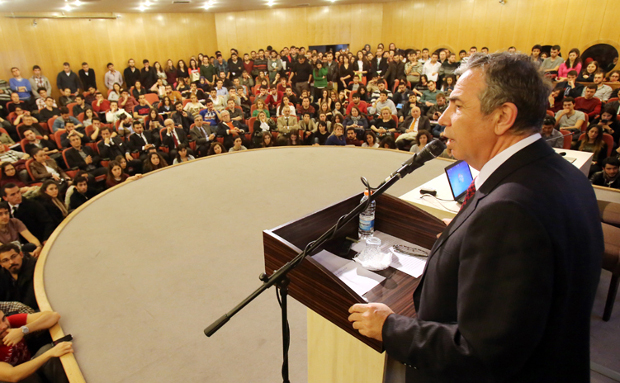 On Monday, February 24, CHP (Republican People’s Party) candidate for mayor of Ankara Mansur Yava? visited Bilkent University with his team and held a conference as a guest of IDEA, the Innovative Development and Economics Society. As Mr. Yava? is both a candidate for the upcoming mayoral election and a successful former mayor of Beypazar?, his talk received great interest from students and a number of faculty members as well.

After informing the audience about the mayoral duties and city management overall, and also the current debt of Ankara, he moved on to talk about the upcoming election and elaborated on some of his projects for Ankara, including his proposed solution to the city’s transportation problems, and price reductions for the use of water facilities.

Mr. Yava? then went on to discuss the issue of over-construction in Ankara and how the city’s Tunal? and K?z?lay areas could be turned into more pleasant and attractive districts, giving examples such as Ba?dat Avenue in ?stanbul. Among the issues Mr. Yava? mentioned, reduction of water prices and transportation problems received the most attention.

While the topic of city management was a relatively serious one, Mr. Yava? managed to keep the audience’s interest by incorporating some elements of humor, and criticizing his opponent in the elections, the current mayor Melih Gökçek, in a somewhat droll manner, referring especially to the recently built “Welcome Gates” in Ankara.

Following his speech, **************** Mr. Yava? answered questions from audience members, and then got together with students and instructors for photos to be taken.