MEP Volunteers Give, and Receive, on Nursing Home Visits

05 March 2019 Comments Off on MEP Volunteers Give, and Receive, on Nursing Home Visits 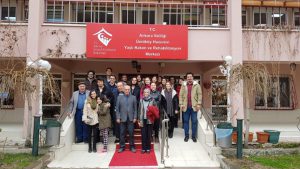 While many projects undertaken by the student volunteer organization TDP (Toplumsal Duyarlılık Projeleri/Social Awareness Projects) serve children and young people, one project in particular focuses on those at the other end of the age spectrum. The Nursing Homes Project, or MEP (Manevi Evlat Projesi), exists to give moral support to elders living in rest homes. During their frequent visits to homes for the elderly, project volunteers let residents know that they are not alone and have not been forgotten.

Most recently, MEP volunteers visited Ümitköy Huzurevi Yaşli Bakım ve Rehabilitasyon Merkezi on February 23, where they spent time chatting with the residents. The Bilkent students found that the visit did them as much good as it did the people they were visiting.

“After tiring assignments and rushing around, those two hours on Saturday were like medicine,” said one MEP volunteer. “The time passed without our even realizing it as we laughed over military service stories, listened to regrets about the past – one resident had even wanted to star in a TV show about the mafia! – and shared people’s memories of never-ending birthdays.

“To be the grandchildren, confidants and friends of so many is an extraordinary experience. Seeing many hands waving goodbye after a long session of hugs is one of my biggest motivations.”

As project representatives say: Be a part of MEP, and be someone’s grandchild for a day. 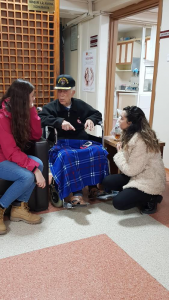