16 December 2013 Comments Off on MORE THAN INSPIRATION?

Like their counterparts in every branch of art, it is quite common to see musicians inspiring each other. When it comes to their music, this becomes even more apparent. This week I am going to list some of those “inspirations” that I’ve encountered. I’ve used quotation marks for the sake of being politically correct, since in the list below you’re likely to find something more than inspiration. So I’ll let you decide whether it’s inspiration or something else. I’ve organized the list in the following manner: the first band/song is the one inspired by the latter.

Excel was one of the inventors of the “crossover” genre, together with D.R.I, Suicidal Tendencies, Nuclear Assault and S.O.D. The song “Enter Sandman,” which is the opener for Metallica’s 1991 album “Metallica” (aka Black), has a strange similarity to Excel’s “Tapping Into the Emotional Void” from their ’89 album “The Joke’s on You.” I was really shocked when I first noticed how much alike these two songs sound. 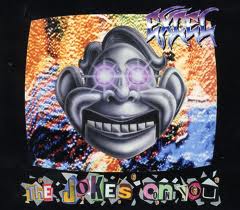 This one was a really big disappointment for me. I used to have a special liking for Deep Purple, but after noticing this “inspiration” (unfortunately there are also others), I lost all my respect for them. It’s a Beautiful Day is an American psychedelic/folk-rock band, and I can say they are very underrated. In their self-titled debut album released in 1969, they have this great instrumental song, “Bombay Calling.” It seems to have been quite liked by Deep Purple keyboardist John Lord, so that in the latter band’s famous 1970 album “Deep Purple In Rock” one of their most famous works, “Child in Time,” appears.

Deli Gömleği is a Turkish alternative rock/grunge band. To be honest, I don’t really know many songs by this band, but “İçtenlik Öldü” somehow reminded me of California hardcore punk band Fang’s “Money Will Roll Right In.” Actually I first heard a cover of this song by Mudhoney & Kurt Cobain and then listened to the original one. But I can assure you that the song by Deli Gömleği is not a cover, and sadly you can even find the feedback in the intro of the song.

Well, this one is again from a Turkish musician. He was “inspired” by the British progressive rock band Uriah Heep’s widely known song, “Lady in Black.” There’s not much to say about it — just listen to the songs, and you decide.

The Offspring is a band that I really like (especially their first three records), but I have to be unbiased. The song “Why Don’t You Get a Job” from their album “Americana” (with which they have, regrettably, started to become an MTV band) definitely reminds me of “Ob-La-Di Ob-La-Da” by the Beatles. To be fair, most bands have really gotten inspiration from them, but yes, there is a “thin line” regarding this inspiration business.

The last example is a very famous one, coming from the legendary Led Zeppelin. It’s again sad to have to accept this, but the intro part of the groundbreaking song “Stairway to Heaven” from their fourth album “Led Zeppelin IV,” released in 1971, has something in parallel with psychedelic/progressive rock band Spirit’s instrumental song “Taurus” from their self-titled debut in 1968.

As a bonus, we have a special guest. This one is not a musical inspiration; it’s in visual form. Turkish band Ayna shot a music video for their song “Aşık Oldum Anne,” which seems to have been strongly inspired by the video of In Flames’s “Cloud Connected.” Unfortunately, the former video doesn’t even display the use of adequate technology and seems to have been shot very sloppily compared to the perfect stop-motion scenes that can be seen in the “Cloud Connected” video. I am almost sure that this “inspiration” is not the band’s fault but their producer’s.

This list is open-ended, but I want to stop here because I guess I’ve already demonstrated what I wanted to point out. Of course musicians and bands have always inspired and will continue to inspire other musicians and bands, but one should evaluate the thickness (or the “thinness”) of the line. See you next time.