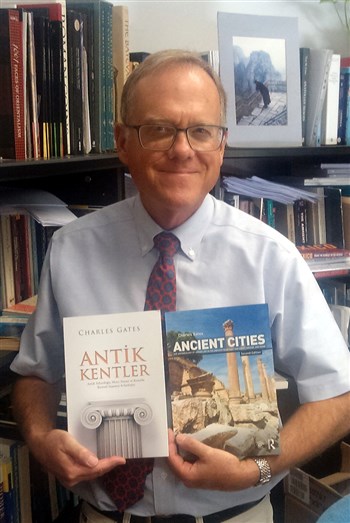 “Ancient Cities,” a much-praised survey of the archaeology of urban life in the ancient world, authored by Department of Archaeology faculty member Dr. Charles Gates and published by the British firm Routledge (2nd edition, 2011), is now available in a Turkish version.

Dr. Gates’s publication is chronologically and geographically broadly set, ranging from the semirural life of early Near Eastern villages and towns to the bustling urban landscapes of the Greek and Roman world. Written in an engaging, sweeping style, the book is a treasure trove for archaeology staff and students and interested laymen alike. The illustrations that accompany the text were done by Neslihan Yılmaz, a Bilkent Archaeology graduate (’99).

“Antik Kentler,” published by Koç University Press, is now available in bookstores at the price of 52 TL.