Since the beginning of the fall semester, the Music Club has been conducting online interviews with well-known musicians from rock and other genres, giving Bilkent students a glimpse into the music world. On February 20, the club met and talked with Kutlu Özmakinacı, founder of the rock band Yüksek Sadakat, about the band’s music and music in general. Among the topics he discussed in response to questions from the Music Club’s board members were his own start in music, the formation of the band and the songwriting process. 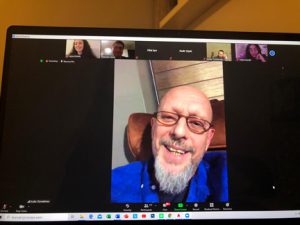 Other bands and musicians interviewed to this point include Soen, The Pineapple Thief, Moğollar legend Cahit Berkay, Eren Başbuğ, who has worked with Dream Theater and Ben Caplan.

More information about the Music Club’s activities can be found on the GE250/1 lists, in BAIS emails and also on the club’s Instagram account @bilkent_mk.